From Path of Exile Wiki
(Redirected from Piety)
Jump to: navigation, search

Piety of Theopolis, better known as simply Piety, is a major character in the storyline and a boss in Act 3 (the Lunaris Temple) and in Act 4 (the Belly of the Beast) as Piety, the Abomination.

Defeating Piety is the objective of the quest Piety's Pets. You obtain the

Tower KeyTower KeyGod will only offer the door.
Man must choose whether to open it.

when you kill her, thus allowing entry to the Sceptre of God. She returns in Act 4, and after being defeated again, she offers the quest Corpus Malachus and helps in the fight against Malachai, The Nightmare.

Before the events of Path of Exile, Piety was known by the name Vinia in Oriath, where she funded her practise of thaumaturgy through prostitution. Due to her crimes she was condemned to burn in a pyre, but before her execution took place she supped with High Templar Dominus, who had come to hear her confession. However, Vinia was able to convince Dominus to let her live. It is possible, though never directly stated, that she achieved this by sharing her knowledge of the powers lying dormant in Wraeclast. The fact that the banishment of criminals to the continent began after Vinia was pardoned by Dominus supports the theory. After Vinia was granted her amnesty she enjoyed the patronage of Dominus, who made her his right-hand woman and gave her the name "Piety" to reflect her new loyalties.

In Path of Exile

In-game, the exiled player meets Piety for the first time when searching for Brutus in the Axiom Prison. Upon ascending to the Warden's Chambers the player interrupts a woman studying the necromantic writings of Shavronne. Surprised at meeting an exile in such a place, Piety introduces herself and vanishes into the shadows and leaving the exile bewildered. After defeating the Warden, the player runs into Piety yet again in Prisoner's Gate where she uses her thaumaturgy to raise Shavronne's old barricade, thus blocking the way inland and forcing the player to find an alternative route.

It is only after travelling deep within the Phrecian Forest to the Chamber of Sins that the player encounters Piety again. Piety had been trying to acquire the Baleful Gem, a powerful thaumaturgical artifact of the Old Empire. Thankfully, the Gem was not left unguarded by its creator and Piety is forced to retreat. Before entering a portal of her own, she praises the player's skill and urges them to find her in Sarn.

In the City of Sarn, the player encounters a Blackguard party holding a young woman, Clarissa, captive. Upon freeing Clarissa from the Blackguards, she informs the player that she and her lover, Tolman, had been captured by Piety. Clarissa asks you to find Tolman in the Crematorium, where he is still being held captive by Piety herself. As expected, the player finds Piety and Tolman in the Crematorium, but after a brief fight, Piety manages to escape the player yet again.

After journeying through Sarn, the player is given a quest from Grigor to finally hunt down Piety in the Lunaris Temple, located west across the river that splits Sarn. Piety had turned Lunaris Temple into her personal laboratory where she and her fellow scientists are attempting to create new Gemlings from humans. This hasn't yet borne any fruit; instead, the once beautiful Lunaris Temple is now filled with horrible miscreations. Piety is finally slain by the Exile in the lowest level of Lunaris; however, the victory is short-lived, as it is later revealed she was saved by Malachai.

Piety is next encountered as a twisted abomination in the Belly of the Beast, where she immediately attacks the player. When she is defeated, she changes her mind about Malachai and thus turns to working together with the Exile. Piety gives the quest to obtain Malachai's organs, guarded by three loyal followers of his. Once the Exile has retrieved said organs, the Black Core opens and she joins the player in the fight against Malachai. During the battle, Piety is finally killed, having fallen to Malachai impaling her. 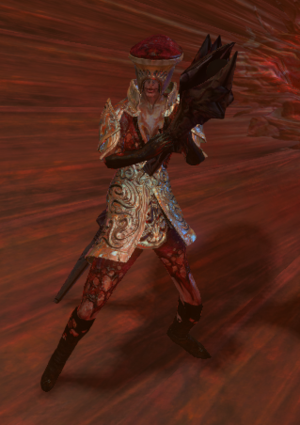 Piety after being impaled by Malachai's sceptre

Malachai chose his three most loyal servants to guard those precious innards. His Godless Three. Inquisitor Maligaro, Shavronne of Umbra, and Doedre Darktongue.

If the history books are accurate, High Templar Voll burned Maligaro and Doedre at the stake on his way to lay siege to Sarn. He didn’t have to worry himself with Shavronne. Brutus had already sorted her out.

Yet slaves of nightmare seem to be shackled just as tightly to life as they are to the Beast. I, of course, am living proof of that.

Don’t worry yourself with that little detail, though. Shackles are made to be unlocked.

That’s twice I’ve underestimated you, sister. Twice now that your talents have proved to exceed even mine. So it looks like you’ll be the one to finish what I so blindly started.

Part of me wishes I’d died at your feet as was intended. The little girl within me that shies from darkness, from greatness.

It was Malachai who reached out to me, who wrapped me in Nightmare… made me his slave.

He has shown me greatness beyond imagining, so much that I thought my mind would shatter under its weight. And although my mind remains intact, my dream were not so fortunate.

Malachai is in the Beast’s black core right now, harnessing all that the Beast is, and will be. He will destroy this world and forge it anew in the divine image of Nightmare.

Yet as powerful as Malachai has become, he’s neither unreachable nor invulnerable. He sacrificed much to become the Beast’s prime servant, both in spirit and in flesh, yet three vital organs remain.

His heart, lungs and entrails, keepsakes of humanity lost. They will be our tickets into Malachai’s private, little show.

Venture deeper, deep into nightmare’s abattoir. I’ll follow when I’m able. You find me those organs and I’ll get us into the Black Core.

Malachai (after reaching The Harvest)

Malachai knew exactly what he was doing when he created the Rapture.

His primary concern... get inside the Beast and take up the reins of true power. And his second objective… incite a Cataclysm that would wipe the very thought of resistance from this land.

The Beast is the source of all thaumaturgy, the one power in this world that transforms ‘what is real’ into ‘what is imagined’.

You’ve come such a long way since we first met in Axiom prison. I was that close to snuffing you out, then and there, sister.

But now look at us! Working together to destroy the greatest terror that Wraeclast has ever known. If I were the crying type, it’d bring a tear to my eye.

Before we walk this path together, it’s important that you understand one thing about me.

I don’t regret a single thing that I’ve done. I set out to rise humanity up from the cloying mud of its fleshly ignorance. My mistake was not in the aspiration, but in the execution.

Now I intend to correct that mistake.

Really, I’m not helping you, exile. You’re helping me.

So, have you found those juicy organs for me yet? 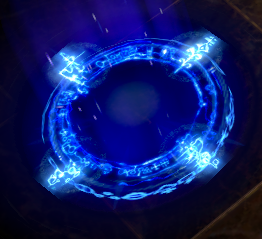 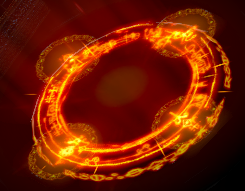 The first fight with Piety takes place in the Crematorium where Piety can be found surrounded by several Blackguards. It is advised to draw out the Blackguards first and then proceed to attack Piety. Piety uses a wide range of Lightning spells during the fight so lightning resist is important in order to survive her attacks. When Piety's health drops to half she breaks off the battle to open a portal, leaving you victorious. While she can still be damaged after reaching half health, she cannot be killed.

When the player enters in a portal located in a large elevated dais in the Lunaris Temple Level 2 he or she is teleported to a separate circle-shaped boss room where Piety waits. Players are advised to create a town portal for flask recharging and emergencies before confronting Piety in the opposite side of the area.

Upon reaching Piety, she taunts the player and produces the first burning and chilling portals. During the fight Piety changes between three different forms by running to these portals; in human form she casts powerful lightning spells, in the Fire form (Burning Portals) she rushes to attack the player in melee, dealing heavy damage, and in the Ice Archer form (Chilling Portals) she shoots out multiple ice arrows dealing cold damage to the player. Thus it is recommended for the player to be capped in each of the three elemental resistances.

Generally the Ice Archer form is considered to be the most dangerous of the three, and most players decide to take cover behind the poles and corpse piles, waiting her to transform back to human form. It is believed that these phases are timed; so when she turns back to human form, that is the best time to deal some damage. Players who have enough defenses can also engage the Fire form if they so choose. It should also be noted that when in melee form she seems to focus on mainly one target so when in a party, those playing a ranged character can score a few hits on her. From time to time she also summons few miscreations and blood elementals to serve as distraction, and more importantly as a way for the player to recharge flasks if need be.

Piety reappears as "Piety, the Abomination" at the end of The Belly of the Beast Level 2 in Act 4. She summons corrupted lightning balls and casts a lightning beam rotating in a circle. Her lightning beam deals physical as well as lightning damage.

There is one achievement related to Piety of Theopolis: