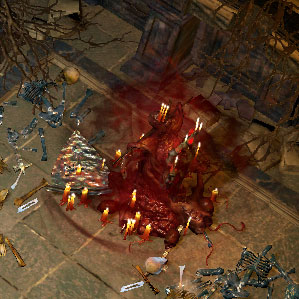 Mysterious Darkshrines can be found in the Lord's Labyrinth. When activated, a shrine will impart a beneficial effect. There are four darkshrines in each run. They are found by pulling switches on the walls. The minimap will show the passageway, but it won't appear in the game itself. They will always appear on the upper part of the walls.

Activating a Mysterious Darkshrine plays a randomly selected voice-over line, spoken by Izaro. Depending on the player's game settings, a text transcript of the voice-over may be displayed in the chat log. These voice-overs should not be confused with the text that appears in the chat log to describe the effect of the activated shrine. There are three possible voice-over lines:

There are a limited number of shrine effects, all beneficial. Which effect a Mysterious Darkshrine will impart is determined by the layout of the Labyrinth. "Be Twice Blessed" is the only effect which can occur more than once, but will provide no additional bonus for multiple effects.[citation needed]