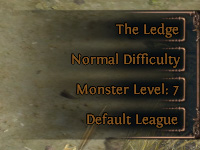 Every explorable zone has an associated monster level which roughly describes how difficult it is. Players can view a zone's monster level in the top right corner of the screen by pressing Tab.

Each area has a predetermined non-random monster level. Monster level progresses at a more-or-less steady pace as the player's character advances through the game. Currently the monster levels range from 1 (The Twilight Strand) to 67 (The Ossuary/The Reliquary/The Feeding Trough) in the acts and 68 to 84 in the maps.

The level of a monster determines its life, damage, and defenses. A monster's level also limits which affixes it can receive if it is magic or rare, including special affixes such as Nemesis and Bloodlines modifiers.

Monster level determines the item level of items found in chests in the area and items dropped by monsters[1]:

There is a penalty to the number of items dropping in areas more than two levels lower than your character level. See Drop Rate.

Please note these are base attributes, meaning they will be further multiplied by the monster's specific multipliers, it's rarity, modifiers and so on.

Multiplicative life based on the monster's rarity and level.

The item quantity and rarity bonuses from bosses stack additively with other monster-specific bonuses (and multiplicatively with player/map bonuses).