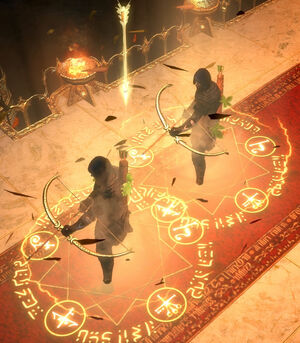 Mirror Arrow is an attack that fires an arrow, dealing damage and summoning a clone when it reaches its destination. The clone is a minion that uses the player's bow and quiver.

The following passive skills are related to Mirror Arrow:

Attack speed of Mirror arrow minion is capped at a maximum of 10 attack over 5.7sec (~1.8aps) see https://www.pathofexile.com/forum/view-thread/1422529 for detail.