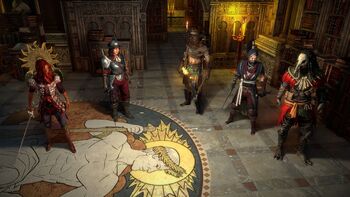 The masters Zana, Alva, Niko, Jun and Einhar.
This page is about the NPCs. For the divination card, see The Master.

Masters are five special NPCs that randomly spawn in Wraeclast and offer the player missions. Each master offers unique mechanics and rewards to reap. In exchange for completing these missions, players can unlock crafting recipes on the crafting bench and gain Favour to buy decorations for their hideout.

Masters must be encountered in the wild before they start appearing in various towns in Wraeclast.

Masters can be encountered in most zones, where they will offer a mission. Zana can only be encountered in Maps. If not spending accumulated master mission from map device, the chance to spawn a "wild" master in map is 10% (2% for each master).[1]

See also: Atlas of Worlds#Atlas Mission
3.10 Atlas. On the right are counters for accumulated Master missions to be spent

Each day five new master missions (1 for each master) at will be added to the player's accumulation[2] after the reset at 0:00am (GMT+0) based on the tier (white, yellow, red) of the player's last completed map. The map must be completed the day before in their own map device. Completing party-play maps from other players map devices does not count. Completing blighted maps do count.

There is 35% chance (on average 7% per master) to have additional master mission from completing the map. This will increase with atlas Awakening Bonus completion.[3]

You can use Atlas Missions (option can be found by talking to the master or on the Map Device directly) to guarantee a master spawns in your next non-unique map. Your Atlas Mission counters are tracked for each set of map tier colours: white, yellow, and red; which one you receive is the same as the tier colour of the map you received it in. Your accumulated number of Atlas Missions can be seen in the Atlas layout screen. There is no limit to how many Atlas Missions you can store. You can redeem an Atlas mission by speaking to a master then running the map from that screen, or clicking the master of choice in the map device.[4]

When attempting to maximize the number of master encounters, either generally, or for a specific master:

Each master has a Favour level, which goes up to 7. Favour level increase based on the specified mission objectives completed. Each Favour level unlocks new decorations to purchase.

Using the crafting bench in your hideout, you can add a master crafted mod into an item. Crafting recipes are unlocked as you play the game and complete missions for masters. Unlocked recipes are retained league-wide.

The crafting bench offers a list of mods that can be crafted onto items of certain types for a cost. Usually, only one crafted mod may be added to an item; the crafted mod is shown in a brighter color than normal mods. Crafting a mod follows the normal affix rules. Specifically:

Likewise, the existence of a crafted mod on an item prevents a mod of the same type from being added via an  Exalted OrbExalted OrbStack Size: 10Augments a rare item with a new random modifierRight click this item then left click a rare item to apply it. Rare items can have up to six random modifiers. The item's Catalyst quality increases the chance of applying a modifier which matches the quality type. Removes 20% Quality applied by Catalysts on use.
Shift click to unstack. .

Players can unlock crafting recipes to a special mod which doesn't grant stats or bonuses, but affects other mods and may override regular crafting rules.[5] These meta-crafting mods are treated as regular master crafted mods; they take up either a prefix or suffix spot but, like any other crafting mod, only one can be added at a time. This can be bypassed with the Can have up to 3 Crafted Modifiers mod.

Using an  Orb of ScouringOrb of ScouringStack Size: 30Removes all modifiers from an itemRight click this item then left click on a magic or rare item to apply it.
Shift click to unstack.  on an item with the "Prefixes/Suffixes Cannot be Changed" meta-crafting mod will not remove prefixes/suffixes.[6]

This does not apply to mods protected by the "Prefixes/Suffixes Cannot be Changed" meta-crafting mods.

Holding control and left clicking on a master will give a shortcut to options specific to each master. This may save time and/or clicks for some players.