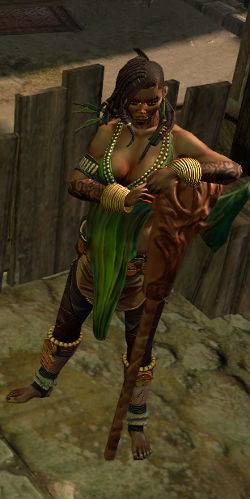 Maramoa Patua is an NPC located in Act 3 and Act 8.

Unlike other exiles, Maramoa intentionally became an exile to be free of slavery in Oriath. She is a Karui woman descended from Kaom.

Maramoa Patua thanks you, exile, for returning our Clarissa to us. She is the gentle heart of this place, a spirit still capable of love in this wasteland of hatred. Yet that gentle heart remains in jeopardy. Tolman isn’t deserving of Clarissa, but she’ll not smile until he’s by her side.

General Gravicius demands absolute obedience from his Blackguards... meaning he's surrounded himself with cowards and lackwits unable to lift a finger without orders.

If you are able, traverse the river and murder Gravicius in his own barracks. You'll be ripping the very mind from the skulls of our enemies.

This Ribbon Spool device… why would the Blackguards want to protect it, on this side of the river too? What is its import to them? And why have they not taken it back to their encampment?

I give you only questions, I know. You found it near the Solaris Temple? Then perhaps that’s where you should look for your answers.

Dominus and his Ebony Legion arrived some time ago. Now the Blackguards scour Sarn like hungry maggots on a carcass. What’re they looking for? Only that which is best left unfound.

It's an often-told story among the Karui. How Voll of Thebrus bent on his knee to my ancestor, King Kaom, and promised freedom in return for war. While Voll raised his Purity Rebellion in the heart of the Empire, Kaom took Lord Lioneye's head and the southern coast all the way to the Siren's Cove. It was the greatest conquest the Karui had ever seen.

If I knew how to cross the river safely, I'd be wearing Gravicius' head on my belt.

Traversing the sewers under the river. I should have thought of that myself. Yet, the more of a picture you paint of that Undying concoction in the sewers, the less I want to see it.

If you manage to destroy it, expect a storm of undeath to descend upon you. The dark is their home, and there’d be nowhere more homely to the Undying than a pitch-swathed drain under a river.

Clarissa will weep for Tolman. She must. The cloud is darkest before the rain.

Hargan is a man of many claims, and those claims seldom dance harmoniously together. A lie is a death sentence in Ngamakanui, so I was raised a daughter of Truth. Hargan is a son of self interest. He's no warrior nor spirit-singer; He's a korangi. I don't know the right word in Oriathan, but in Karui it means 'he who wins wars with false promises'.

Grigor straddles two worlds. one foot planted on this soil, one in the dirt of spirit and shadow. When you speak with him, be sure to know from which world his words arise.

Citizens of Sarn that was... the Undying have been around for hundreds of years. Left to their own devices, they're likely to survive for hundreds more. Still, they're not immune to mortality's touch. They can be killed... with some difficulty.

There’s still prey out there. An over-reaching witch, floundering out of her depth. Happy hunting, Makoru.

You have claimed the most worthy of prey, Makoru. Piety, the Mistress of Corruption. I’m not saying the war is over, but you’ve given Wraeclast a much needed respite. Because of you, this land lives to see another dawn.

And don’t forget that you’ve done Grigor a justice of some magnitude. He will wish to speak to you.

To kill a man like Dominus, that’s an accomplishment worthy of Kaom, my greatest ancestor. Were we in Ngamakanui, I’d make you a makanga, an honoured warrior. But we are not in Ngamakanui. We dwell in a city of death, and my respect is all the honour I can bestow on you.

You have claimed the most worthy of prey, Makoru. Piety and Dominus, the Harbingers of Nightmare. I’m not saying the war is over, but you’ve given Wraeclast a much needed respite. Because of you, this land lives to see another dawn.

Good to see you in Sarn once again. I wish that we could be greeting under fairer skies, yet this city remains clouded in strife.

Lunaris, Eternal goddess of the Moon and her sister, Solaris of the Sun, have risen to reclaim what was once their own. Siblings equal in strength, mighty twin rivers converging, sweeping all before them.

We are cornered animals, awaiting the deluge that will surely drown us. Yet there exists a pair of ancient treasures, the Sub Orb and the Moon Orb. They are our hope… our desperation.

These owl eyes of mine have been watching the sun goddess from afar. The Sun Orb lies within her temple, guarded by her most ardent devotee. An exile who, in his insanity, has taken to calling himself, 'The Dawn’.

That orb is the seed that must be stolen from this new son of hers, and planted at the feet of his ancient mother.

I've been keeping a close eye on that exile-turned-sycophant who calls himself 'The Dusk'. Dusk carried the Moon Orb into the Lunaris and has not returned with it, not as far as I have seen.

No doubt he clings to that orb like it’s his adopted mother's own nurturing breast. If you were to wean him from the teat, and place that orb at the bereft mother's feet, we may yet see the moon itself fall.

The Orbs of Sun and Moon

By the earth and sky, the power of the goddesses lies in your hands. Take these seeds and plant them in the fertile stone at their feet. From what I have learned, It is my hope that the orbs will force Solaris and Lunaris to grow limbs and flesh, to engage you in mortal battle.

May this come to pass, and may you cut down these goddesses as a forester might fell a pair of stubborn old trees.

You have offered us the greatest of gifts. Freedom. With these divine tyrants gone, we are free to live our lives as we wish, not as is ordained.

In time, all of Sarn will thank you. For now, let it simply be me.

Grigor is the butterfly that has lost its wings to a cruel child, and this place of respite has become a cage for his pain, a breeding ground of bad memory. We spoke and Grigor shared his resolve with me. He can no longer live with the torment that Piety has injected into his heart.

Like the warrior-poet he is, Grigor has ventured into the unknown, to find a cure for his body and mind, or die in the attempt.

Clarissa and Tolman (after defeating Tolman)

If I am a watchful owl then you are the courageous hawk, swooping with sharpened talons to wrench the serpent from the child's neck. Clarissa will bear that wound for the rest of her life, but I am glad you were there to save her from following poor Tolman into the dirt.

Perhaps now that Clarissa has lost her love of death, she will finally be able to embrace life.

They walked our earth in the times of great strife, cruel and hideous shadows, cast against the clay wall of ruined abode. Thaumaturge Malachai grew them out of the vain ambitions of his dark imaginings.

Emperor Chitus believed the legionnaires belonged to him, that gemling men would beat to the drum of his own crystalline heart. But as the silhouette of the emperor faltered and fell, burned out by the light of true men, some of the legion remained.

The cataclysm turned legionnaire into monster, another mindless man of undeath. Yet this Captain seems to have regained his faculties. some of his old warrior intelligence.

I worry for the rest of his soldiers, how they may grow from mindless killing machines into something far worse.