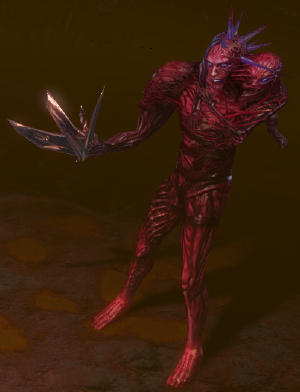 Maligaro was a thaumaturgist shortly before the Cataclysm.

He worked for Malachai in the Chamber of Sins [1] as one of his Godless Three, along with his apprentice Doedre Stamatis.[2]. It was Maligaro who invented the idea of making humans even more connected with virtue gems than gemlings, extracting the very essence of the gem and inserting it into the body [3]. He found his work very creative and was considered an artist [4]. Another of Maligaro's creations is a synthetic virtue gem. In his private life, he was quite eccentric, maintaining a homosexual relationship with his slave Raulo [5]. When the Purity Rebellion overthrew the Emperor, the new Emperor Voll had burned Maligaro at the stake [6].

Maligaro is battled by the player several times in the storyline: