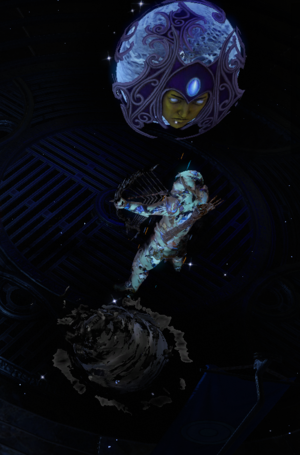 Lunaris, Eternal Moon, in Celestial Form, and Dusk, Harbinger of Lunaris, covered in Ash, and a Dark Vortex on the foreground.

Lunaris, Eternal Moon is the final boss of Act 8. It is one of the bosses of the Solaris and Lunaris fight. The other boss is Solaris, Eternal Sun.

When both bosses are defeated, they are unlocked as major gods in the pantheon system.

In fact, in the boss fight prior, the orb that suspended in the centre of the boss room of Dusk, Harbinger of Lunaris, was in fact Lunaris in her Celestial Form too. In this variant she has fewer skill set, which only shoot vortex that inflict Dark Vortex.[2]

There are currently no items that have a drop table specific to this monster.