From Path of Exile Wiki
(Redirected from Lucky)
Jump to: navigation, search 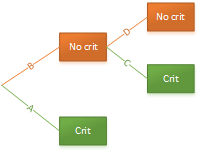 With percentage rolls, such as critical strike chance, lucky/unlucky rolls will be up to a 100% more/less modifier, changing linearly towards 0% as critical chance increases. As for damage rolls, the average damage from the roll will be at up to 33% more or less, when the minimum damage is close to zero, but will have a much weaker effect when the minimum damage is closer to the maximum. 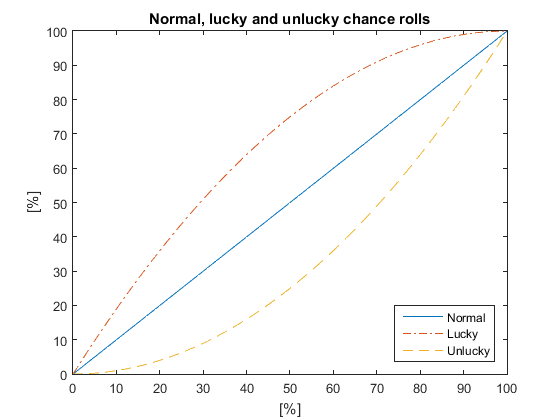 Either roll can make the hit critical, so your critical strike chance on the solid line will be increased to the dash-dotted line on lucky rolls.

More specifically, the lucky critical strike chance can be calculated from the following formula:

It should be noted that these calculations neglect the effect of accuracy on critical strikes.

This is a problem that can be solved with conditional probability.

If the roll failed the die will be cast a second time with the same probabilities. The chance to crit on the second roll is (1) multiplied with A:

The total probability to get a lucky critical strike is the sum of A and (2).

Damage in a Range

Given an integer roll between

, the normal expected value is

. A lucky roll has expected value

. Note that the last term in this is always between

and therefore is negligible (it is a byproduct of the fact our uniform variable only takes values over the integers.)

then we get a

The following base items are related to Luck:

The following unique items are related to Luck:

The following keystone passive skills are related to Luck: