From Path of Exile Wiki
Jump to: navigation, search
Lioneye's Fall
Viridian JewelRadius: Medium (1200)Melee and Melee Weapon Type modifiers in Radius are Transformed to Bow ModifiersThe shield crab does not leave his shell unless it is forced to,
and even then, it knows to keep its distance.Place into an allocated Jewel Socket on the Passive Skill Tree. Right click to remove from the Socket. 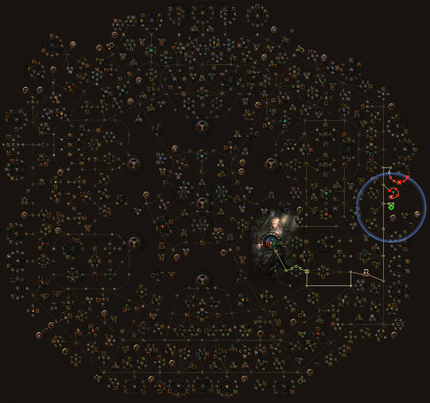 Green circle denotes the typical socket for Lioneye's Fall in Path of Exile 3.13.1. Blue circle denotes its radius, and the red passive skills denote the melee skills that are converted to bow skills.

Lioneye's Fall is a unique

Viridian JewelViridian JewelPlace into an allocated Jewel Socket on the Passive Skill Tree. Right click to remove from the Socket.

Any passive whose description includes the keyword melee or the names of any melee weapon types (such as staff or axe) functions as if that word is replaced with the bow keyword. Examples include:

In the case of the transformed modifier additional Block Chance with Bows, this will only provide block chance provided the player already has some base block chance from an item, such as

The AnvilThe Anvil
Amber AmuletRequires Level 45+(20-30) to Strength8% Chance to Block Attack Damage
10% reduced Attack Speed
10% reduced Cast Speed
+(400-500) to Armour
+(34-48) Life gained when you Block
+(18-24) Mana gained when you Block
+3% to maximum Chance to Block Attack Damage
Reflects 240 to 300 Physical Damage to Attackers on BlockForge your Perseverance on the Anvil of Faith.

Occasionally, a transformed modifier may never be useful. For example, any transformed passive pertaining to dual wielding will do nothing because one cannot wield two bows.

Any node within the radius of a Timeless Jewel cannot be modified by other jewels.[1] This interaction is often encountered when a Brutal Restraint Jewel is placed in the Jewel Socket near the Heartseeker notable and Lioneye's Fall is placed in the socket above the Acrobatics keystone; if this is done then the From the Shadows (Dagger) passive wheel cannot be transformed to bow nodes by the Lioneye's Fall Jewel.

Lioneye's Fall does not work for passives on a cluster jewel, even if it was was socketed on the jewel socket from within that cluster jewel.