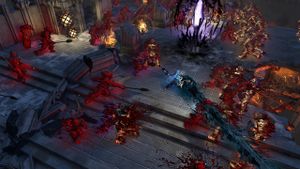 Legions are ancient armies frozen in the midst of battle. They can be encountered by touching a Timeless Monolith, which breaks out the Legions and gives the player a window of time to defeat them.

Players can find a Legion by interacting with a Timeless Monolith. There are several ways to find these Monoliths:

Legion modifiers are currently not offered by Zana, but this may be changed in future releases.

Monoliths will not spawn in small or cramped areas (Ex. the indoors part of

Glacier MapGlacier MapMap Level: 68
Map Tier: 1
Guild Character: UWe must all walk the narrow, winding path.
The end is always the same.Travel to this Map by using it in a personal Map Device. Maps can only be used once.

), so some zones cannot spawn them altogether (Ex. The Tidal Island). Interacting with the Monolith will reveal a battle between two Legions that is frozen in time. During this phase, the enemies can be "killed". A timer will start once the Monolith is activated. The timer can range from 14 to 20 seconds, with a longer timer on lower level zones. Once the timer runs out, all the enemies that had their health depleted will become unfrozen and start attacking. Enemies that didn't have their health depleted will disappear.

Some Legion enemies have a symbol above their heads, indicating what kind of reward they drop. Chests and War Hoards can also spawn, which can be destroyed and opened after the timer runs out. Destroying a Chest or War Hoard will free all nearby enemies without symbols in radius. Rarely, a General of the Legion can spawn.

Generally, rarer spawns will spawn further away from the monolith, and generals will always spawn in the far rear of the formation. Therefore, it's advised to move deep into a formation as quickly as possible if you are looking for rare spawns. Furthermore, if a general spawns, the monolith will display a marker on the bottom in the direction of the general, so check the monolith to see if a general spawned.

There are two types of currency associated with monoliths; each are specific to the legion.

There are a total of five different legions. The Vaal, Eternal Empire, and Karui are the most common, the Templar Legion being rarer, and the Maraketh Legion being the rarest.