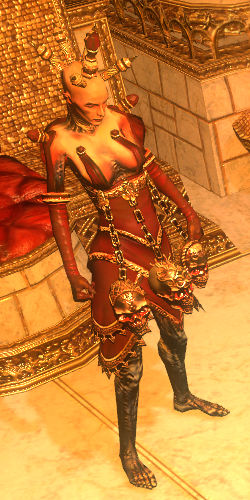 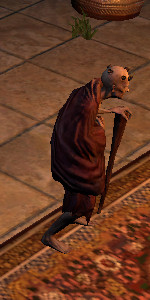 Lady Dialla, The Gemling Queen is an NPC involved in a number of Act 3 and Act 4 quests. She initially appears in the Solaris Temple Level 2 at the end of the quest The Gemling Queen, but travels along with the player to Act 4, with an important role in the final quests. She also provides access to the Eternal Laboratory.

Over two centuries old, and long-isolated inside the Solaris Temple, she is very eccentric in her behaviour, addressing the player as "Not-a-Cockroach" - or occasionally, "Unbug" - in contrast to "cockroaches", the Blackguards. She speaks a lot, often about herself, but usually in a very chaotic way, mixing almost poetic metaphors with bizarre, childish expressions.

Her own, usually very chaotic words are the only source of information about her life - in her youth she was apparently one of Emperor Chitus' mistresses, but was given to Malachai after she displeased the emperor by being overly curious.

She became Malachai's lover and the finest "creation" of his thaumaturgical experiments - the "Gemling Queen". He apparently asked her to sacrifice her life in the Rapture Device, which she refused. However, Malachai managed to penetrate The Beast nevertheless and take control of it, causing the Cataclysm which destroyed the Empire and deeply corrupted Wraeclast. Dialla apparently believes that her selfishness caused the Cataclysm, and The Beast would have been destroyed otherwise; it is difficult to understand, however, what difference her sacrifice was truly supposed to make in Malachai's plan.

Any other details of her life, or how she ended up in the Solaris Temple, are unclear, besides some brief and often disturbing episodes which she mentions. What is clear, however, is that after two centuries, her feelings for Malachai have not faded at all - and she still loves and hates him equally with burning passion.

You are not a cockroach. Strange... inundated with cockroaches, I am. Black ones, four limbs, nasty, spiky things. Are you spiky? If so, my Ribbons will pluck your spines.

Do you weep, Not-a-Cockroach? I do. Tears are infinite. Why, on this very day, I have found a new reason to cry.

The cockroaches will come again. They want the Twist. That cockroach emperor… the other bugs shout his name. Gravicius. Cross, the river, squash the emperor cockroach in his nest.

The bridge? Is it barricaded? That spawns a tricky question. Questions, questions… I asked too many questions. Chitus told me so. I asked where it all went. Our… feculence. He made them show me. Under the river, the sewers from this side to that. Filthy, fetid tunnels, like a rhoa’s cloaca.

A black place, crawling with the Undying. Once beautiful and arrogant Gemlings, now the foul waste of the Empire. Fitting, isn’t it? Apt, apt, apt.

I talked to much, asked too many difficult questions. I was gifted to Malachai. My dear, troubled Malachai.

It’s the most explosive of powders. A sprinkle, the gentlest of dusting if Infernal Talc will provoke gems to a molten rage. For the Undying, the very sun will rise within their flesh.

The Gravicius cockroach is no more. Another emperor crushed underfoot. That's what happens to emperors. What always happens. They never learn.

You have mounted the summit of the Empire, Not-a-Cockroach. You have crushed the bug emperor and wiped his maggot dreams from the skin of Wraeclast.

Dominus exiled you, naked and alone, unto the palm of Death. But you would not die, would you?

No, no… you cuddled Death, promised it the world, made it your consort and so generously shared it with all your fleeting friends here is Wraeclast.

Not once did you forget what you were. Not a cockroach feeding on the corpse of a dead empire, like the pests you crushed as you walked.

A woman. The sort of woman that planted the seed of this Empire right here in Sarn, so long ago.

What teetering and twisted life it still holds dear, this land owes to you, Witch.

Of course, there will be more, You know that, don't you? Emperors. Avaricious little pests scrabbling to steal the legacy of their betters. Unless we burn that legacy, sear its infection from the flesh of existence.

Go north, my lovely Unbug. Go to Highgate, to the beginning of the end.

Dive headlong into the nightmare sea. Catch and roast yourself a nice, big fishy.

Impatient reekings. They waft to me form that mountain. That's all I can smell, Not-a-Cockroach. Stinking anticipation.

The Rapture is our hope. Our desperation. It will set the Nightmare to boil, cook that nice big fishy in its own whining brine.

Listen with all your ears, Not-a-Cockroach. The Rapture was Malachai's most wonderous creation, the only fire hot enough to burn the Beast from existence.

And its fuel? A gemling queen, blood and flesh and gem. Yet my selfish self did not want to burn away, and so the fire was but a tiny spark. The spark of a cataclysm.

I am sorry, my love, my Malachai.

Go to it, Not-a-Cockroach. Find the Rapture. Make me sorry no more.

Malachai (after delivery of organs to Piety)

Yes, I see my Malachai dancing within the darkest. Puppet and Master, power and bondage, cut the strings and the puppet falls. The sow ends.

Before you cut the cords, my Not-a-Cockroach, tell my dearest Malachai that he has played his part most wonderfully.

Tell him that I love him, from the bottom of my hate.

My Malachai is dead. I knew it, felt it, understood it the moment you struck the final blow. I am, I was… the Gemling Queen, and now my King is dead.

We dreamed only the greatest dreams, Malachai and I. A truly eternal empire. Eternal life, eternal love. A future no longer afraid of the past.

Eternal lies, eternal loss, those were our true gifts to Wraeclast. This land could not have asked for a worse King and Queen.

Wraeclast leaves the past behind it, now. Malachai’s past. My past. It thanks you, Not-a-Cockroach. It loves you.

The Rapture was to rend open the hide of Nightmare and broil the Beast's innards in the sweet fire of mortality.

The vessel was strong and oh-so willing.

The medicine was oh-so weak.

You know, Not-a-Cockroach, had I accepted my place, my rapturous role, the Beast would be no more, no less, no anything at all. My selfishness tickled the Beast's fancy and it laughed the world I knew away.

Yet I have had much time to think on my lonesome. Much time to wonder. Wonder if the Rapture really needs to eat a Gemling Queen.

Maybe, something else will get its catastrophic juices slavering. Something like... eyeball soup!

The Eye of Fury. The Eye of Desire. Pretty gems for our pretty designs. But where could they be? Don't fret now. I have my suspicions.

Kaom, the Sovereign of Slaughter. He remains, and suffers his delusions right here in the hall of Nightmare. Fury is all he knows, so Fury Kaom will have.

Daresso, King of Swords. Damned by Desire. Oh, aren't we all? He's down here too, and Desire's curse remains his to bear.

Go on, Not-a-Cockroach. Bring me the crown jewels so that we might wake the Rapture and finally put an end to this pestering Beast!

Old axe for brains. Kaom had Eternals dragged from their homes all over the south coast.

Like sheep, he butchered them, no matter how desperately they bleated. He adorned his doorways with the heads of women and children.

What makes a hero or a villain? It depends who you ask.

The Sword King. Before my time. Beyond my time. Where is time, anyway, when you need it? Never stands still, that's the problem!

Except if you are Daresso. Petrified with love he is. A love he doesn't realise is long, long, long... gone.

Handing in the Eye of Fury/Desire

Pried the Fury/Desire from Kaom/Daresso's dead hand, did you? Or is it dead again' hand? Or 'redead' hand? Or is 'undeath' really just death with benefits?

In which case, you didn't kill Kaom/Daresso because he was already dead. It's all a bit of a grey area, really. And completely beside the point.

Handing the Eye of Fury and Eye of Desire

Fury and Desire, together again. Lovely and lovely. Facets so shiny, replete with the vim of murdered souls.

My Malachai did the crafting. Beautiful work. General Adus did the murdering. Equally beautiful work, in its own juicy way.

"Have you ever been to the End of the World before, my King?" asked the Blackest Monkey.

"No, I have not." realised the Monkey King.

"There is my reason to go where you go, be where you be, my King," concluded the Blackest Monkey in a voice as worm as welcoming as death.

Did you know who wrote that, Not-a-Cockroach? Victario Nevalius, the People's Poet of Sarn. He was my friend... and I betrayed him. Took his love and burned it before his eyes.

Now I am betrayed. My heart burned black by the one man I loved... Malachai.

He's found a new heart, you see. A Beast's heart to cuddle up to, to keep him warm and safe at the End of the World.

Today, I remind Malchai of his betrayal. Today, it is his turn to burn...

After activating the Rapture Device

Malachai's devices, his creations... He loved them all. Not me.

He betrayed me then. Said he loved me. Then said he wanted me to die. He betrays me now. Lets me suffer. Lets me wither.

Am I the only one and only mistake that you ever made, Malachai?

Make him regret his mistake, Not-a-Cockroach. Tear open the Beast's black heart. Rip Malachai from his filthy little nightmare. Cut him, crush him, burn him from existence!

He deserves no better, and I deserve no worse. No love for me. No love, no love... no love.

What is that in your eyes? That glistening, that... softness. Is that pity?

Take those pitying eyes away before I pluck them from your face!

I need but one thing from you now: Malachai... dead.

The little cockroach witch? Malachai chose her... chose her over me?!

User her then. User her as Malachai uses her. Burn betrayal with betrayal. It's all they deserve!

Take this. I've given everything else to him. My youth and and beauty. My body and mind. My heart. And at last, the only thing he ever gave me in return... my gemling power. This is all I have left. I entrust it to you, Not-a-Cockroach.

Malachai taught me not to trust anyone.

It is time to forget everything that Malachai taught me.

"Through treacherous deeds and blind love, the gemling queen has taught us much. Her body remains here, surrounded by flowers, a reminder to all us that we ought to tread lightly when chasing desire. Who can say, after all, where the line is drawn between bold ambition and foolish pride?"

We dreamed only the greatest dreams, Malachai and I. A truly eternal empire. Eternal life, eternal love. A future no longer afraid of the past.

Eternal lies, eternal loss, those were our true gifts to Wraeclast. This land could not have asked for a worse King and Queen.

Wraeclast leaves the past behind it, now. Malachai's past. My past. It thanks you, Not-a-Cockroach. It loves you.