From Path of Exile Wiki
(Redirected from Kaom)
Jump to: navigation, search

King Kaom is a unique boss in Kaom's Stronghold. Defeating him is required for the quest The King of Fury. 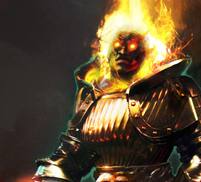 King Kaom of the Karui concept art. It also used as the art for a Steam trading card.

Kaom was the king of the Karui, often cited for his bravery and leadership. In the Karui's home, Ngamakanui, Kaom received a sign [1] (

Kaom's SignKaom's Sign
Coral Ring+(20-30) to maximum Life+(10-20) to Strength
+(2-4) Life gained for each Enemy hit by your Attacks
+1 to Maximum Endurance ChargesA token from the sea
A sign for Kaom
to lead his Karui to Wraeclast.

) saying the Purity Rebellion needed his support against Emperor Chitus. The Karui were called by High Templar Voll to overthrow General Marceus Lioneye in the outer empire. Kaom accepted and led his people to The Coast in Wraeclast using canoes. The battle against Lioneye and his army of Gemlings has been written in The Purity Chronicles Book 3: Fall of a Jade Axe: a batallion of female archers caught Lioneye by suprise. Among these archers was Hyrri, who has studied archery with Voll's finest military tutors. She was of great importance in this battle.[2] When Lioneye fell, Kaom infamously wore his head on his belt.

After he had conquered Lioneye's Watch the Karui passed through the land with their Canoes. Their stories have been preserved on weathered carvings throughout Act 1. These carvings tell of the nightmares they encounter, the undead. Kaom has tried to fight it, praying to his ancestors and eventually received a vision he thought divine, but it was actually from Nightmare.[3] He took a group of warriors and entered the Highgate mines to join the Beast [4].

After the The Awakening however, more carvings in Kaom's Stronghold reveal the black spirit may have not only lead him and his warriors farther into Wraeclast, he had been corrupted by Malachai to slaughter his own men as a 'sacrifice'.

Kaom's trademark was his two handed axe and his belt/body armour, which wore the head of his nemesis Lioneye.