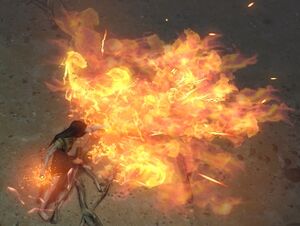 Incinerate is a channeling fire spell that launches a torrent of fire from the user's hands, rapidly dealing fire damage. The longer the channel is held, the bigger the damage and area becomes. Releasing the channel launches a wave of fire that deals more fire and ignite damage.

The following calculation aims towards characters that have a critical strike chance of either 0% or a critical strike multiplier that is strictly 100% (e.g. for characters with the keystones Resolute Technique or Elemental Overload allocated). It can be easily extended to account for critical hits which can be implemented as a multiplicative factor to the skills average base damage.

The additional damage from ignite is assumed to be negligible. Characters that specialise in burning damage are aiming towards the largest ignite damage possible and always want to release at maximum stage if possible.

Under these assumptions, one can calculate the average base damage dealt per second (depending on the current stage n) via

Similarly, the average damage upon release can be calculated to be

for the average ramp-up DPS when building stages. To calculate the average damage dealt by repeatedly releasing at maximum stages, we have to sum the latter two formulas as follows

both brackets are equal, i.e. there is no difference in DPS. However, for

it is inefficient to continually release a damaging wave when reaching maximum stages as a simple numerical evaluation of both brackets shows.

Curiously, note that this calculation holds true for arbitrary

, which implies a significant increase in DPS the earlier the skill is released. For example, a character that has

, but keeps releasing at

, gains an additional 58.3% DPS over a character with identical stats that keeps channeling at 8 stages and never releases.