From Path of Exile Wiki
Jump to: navigation, search
Ice ShotAttack, Projectile, AoE, Cold, Bow
Radius: 23 / 10
Mana Cost: (6-10)
Cast Time: 1.00 sec
Effectiveness of Added Damage: (130%-174%)
Projectile Speed: 3260Fires an arrow that converts some physical damage to cold on its target and converts all physical damage to cold in a cone behind that target.Per 1% Quality:1Superior2Anomalous3Divergent1% increased Cold Damage0.5% increased Area of Effect1% of Physical Damage Converted to Cold DamageDeals (130-174)% of Base Attack Damage
60% of Physical Damage Converted to Cold Damage
(2-75) to (3-113) Added Cold Damage
Chills Enemies as though dealing (100-195)% more Damage
(0-19)% increased Effect of Cold AilmentsPlace into an item socket of the right colour to gain this skill. Right click to remove from a socket. 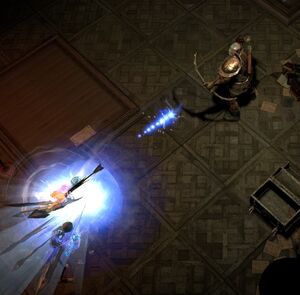 Ice Shot is a ranged attack skill that fires an arrow that deals cold damage to the target and in a cone behind the target. The skill has increased chill effect and has a stronger threshold to apply the chill.

Explosion: On hitting a target, Ice Shot creates a cone-shaped explosion that damages enemies behind the primary target. Targets that create a cone-shaped explosion will not be damaged by their own cone, but can be damaged by other cones created by additional projectiles. This triggers on every hit, so with pierce, fork, chain, or return, multiple explosions can occur with one use of Ice Shot. The explosions can overlap.