From Path of Exile Wiki
Jump to: navigation, search
For the Immortal Syndicate member, see Hillock, the Blacksmith.

Hillock is a unique monster in The Twilight Strand in Act 1.

Defeating him is the objective of the quest Enemy at the Gate.

They called him "Hillock". He was born huge: so large that he nearly split his mother in two. Growing up, he was kept from other children, for worries that his freakish size would lead to injury whenever play turned rough. As he grew into a man, his growth continued unabated, and people came from far away to behold him. Fittingly, Hillock found work as a Blacksmith, his massive arms capable of swinging a hammer faster and harder than three men. Hillock was a man of tremendous appetites, the greatest of which was drink. After a day of work, he could often be found surrounded by stacks of mugs, building a stupor to match his strength. He was giant, but mostly harmless, and things might have stayed that way if only that drifter had kept his mouth shut. It was probably an innocent comment, perhaps made in jest. Whatever the case, Hillock was deep in his cups, and the drifter's words sent the giant man into a drunken rage. His first blow killed the offender, nearly tearing his head from his shoulders, and when his friends rushed to help, they were met with snarling fury. By the end of the melee, the ground was drenched in blood, the floor strewn with mangled, trampled bodies. Hillock staggered back to the smithy to nurse his wounds. No one dared enter to make him answer for his crime, and in the days that followed, people were made uneasy by a ceaseless clanging and scraping that drifted out of the building.

When Hillock finally emerged, he was a changed man. He was silent and humorless, and now he carried with him a gigantic blade, fashioned from his long, frenzied labors in the aftermath of the slaughter. Having tasted murder, Hillock had an appetite for that as well, and he would hack off a man's limbs or head at the slightest ill glance or provocation. Finally, a group of his victims gathered their courage, and in the dead of night, they crept into the smithy, where four of the strongest among them plunged the great sword into Hillock's chest while he slept. Then they carried him far away, and hurled his body down the cliffs into the ocean.

That should have been the end of him, but it wasn't. Some months later, a breathless fisherman returned from seas off the coast of nearby Wraeclast, and reported that he'd seen a hulking, staggering apparition in the surf. Following that sighting, the bodies began to pile up, butchered like cattle, hacked to bloody pieces. In death, Hillock is a far greater terror than he ever was in life. He walks the shores of Wraeclast now, his animated corpse still pierced by the great sword that slew him. He does not feel the icy ocean spray, nor the numerous arrows that now riddle his body. His cold heart is filled with a terrible malice. Any brave enough to put him down for good would surely be met with great reward.

Defeating Hillock is easy. Use your equipped skill gem for more damage(RMB or W), when out of mana refill ( hotkey 5 by default initial setup). If he gets a few hits on you, refill your HP (hotkey 1 or 2). Regular attack when needed (LMB or Q).

At around 50% of his life Hillock pulls the sword out of his chest, which will increase his attack speed while also restoring a portion of his life. 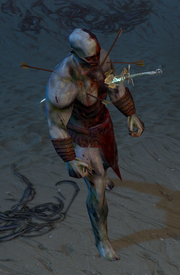 Uber Hillock. The sword on the chest is Oni-Goroshi instead of generic sword in the normal Hillock

There is a very low chance for Hillock to spawn as "Uber Hillock". The sword on his chest is replaced with an

Oni-GoroshiOni-Goroshi
Charan's SwordOne Handed Sword
Quality: +20%
Physical Damage: 6–13.2
Critical Strike Chance: (8.50%-9.50%)
Attacks per Second: 1.45
Weapon Range: 11Requires Level 2, 9 Str, 9 Dex40% increased Global Accuracy RatingUses both hand slots
(70-90)% increased Critical Strike Chance
Adds 2 to 3 Physical Damage to Attacks per Level
Gain Her Embrace for 3 seconds when you Ignite an Enemy
While in Her Embrace, take 0.5% of your total Maximum Life and Energy Shield as Fire Damage per second per Level
Item has 6 Sockets and is fully linked (Hidden)"Your name is Demon Slayer? Really? Good name for rotgut, that."
She said: I prefer "The Goddess Of Swords". Much more dignified. And accurate.
"Demon Slayer The Cheap And Nasty it is then. Burns going down, burns coming up?"
She said: Every single time, Charan. And still...you'll bathe me, and you'll drink my love. Until you can't.

, which drops on death. He has more life and damage and can do a Leap Slam that summons zombies like his map boss counterparts.

To speed up this procedure, a batch of three or four new characters can be used in serial to farm Hillock in this manner (each Hillock kill takes about 30 seconds with +10% movement speed boots). Furthermore, using Scion will allow you to take movement speed nodes on the bottom right of the tree, hence allowing you to gain experience at a faster rate.