From Path of Exile Wiki
Jump to: navigation, search
Herald of PuritySpell, Herald, Minion, Duration, Physical
Mana Reserved: 25%
Can Store 1 Use(s)
Cooldown Time: 1.00 secRequires Level 16Grants a buff which lets you deal more physical damage. When you kill an enemy while you have this buff, this skill will summon a Sentinel of Purity, or refresh the duration and life of an existing one instead if you have the maximum number of them. The Sentinels of Purity have a single-target melee attack and an area melee attack.Per 1% Quality:
1% increased Minion Movement SpeedBase duration is 12 seconds
Maximum 4 Summoned Sentinels of Purity
20% chance to Summon a Sentinel of Purity when you Hit a Rare or Unique Enemy
Grants (9-12)% more Physical Damage
Summon a Sentinel of Purity when you Kill an Enemy
Minions deal (0-95)% more Physical Damage
Minions have (0-38)% more LifePlace into an item socket of the right colour to gain this skill. Right click to remove from a socket. 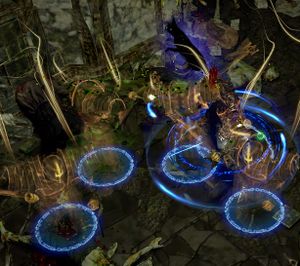 Herald of Purity is a herald skill gem. When activated, it reserves mana and grants a buff that adds physical damage to attacks and spells. It also summons a Sentinel of Purity minion when the player kills an enemy or on hitting a rare or unique enemy while active.

The following unique items are related to Herald of Purity:

The following passive skills are related to Herald of Purity: No results found for the given query.

The list below shows microtransactions for Herald of Purity.