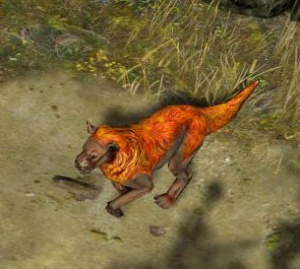 The climb up the cliff's face has been long and arduous. Sweat has blurred my vision for hours, my muscles ache from the strain of traversing the endless switchbacks. Fighting in deep sand is the toughest labor yet, especially when you're beset by waves of those blasted spitters, hungry scavengers, and the walking dead. Yet somehow I've fought my way through, and now I stand abreast the clifftops, breathing in the brisk salt air and hoping for a brief respite from the battle. What a foolish hope, this is Wraeclast after all.

They descend on me from several directions, heads down, ears back, nearly silent. Their great strange paws pad lightly across the rough stone of the cliff face. Their faces are an enigma, neither dog nor feline, but something unnervingly right in between. At first I see only two of these beasts, but soon the hackles on my neck rise and I turn quickly to find three more slinking up behind me. They have me surrounded.

With a cry, I lift up my notched blade and throw myself at them. The beasts answer my attack with ferocity, leaping in to swipe and bite. Their wet, stinking breath is burning hot against my sweaty face as I slash at them, their razor sharp teeth mere inches away from tearing my skin. With weary arms I fight, watching with dismay as more come racing into view, drawn by the sound of battle and the chance of a warm meal. Maybe they thought me easy prey, but not this day!

The battle continues for a seeming eternity, but suddenly I am turning the tide. I am surrounded by hacked, hairy corpses, my own blood mixing with theirs on the stony ground. As my foes dwindle, their courage wanes, and I am spurred on with new strength. My final predator tries to flee moments too late, and my sword catches it turning away, cleaving its head nearly in two. It is over, I have won. I gather up the spoils of my victory, and then it dawns on me: I know the name of my defeated enemy. Few have met the dreaded Hellions of Wraeclast's cliffs in battle, and fewer still have lived to tell my tale.