From Path of Exile Wiki
Jump to: navigation, search
HatredAura, Spell, AoE, Cold
Radius: 36
Mana Reserved: 50%
Can Store 1 Use(s)
Cooldown Time: 1.20 secRequires Level 24Casts an aura that grants extra cold damage based on physical damage to you and your allies.Per 1% Quality:
2% increased Area of EffectYou and nearby allies gain (16-25)% of Physical Damage as Extra Cold Damage
You and nearby allies deal (14-18)% more Cold Damage
+(0-19) to radiusPlace into an item socket of the right colour to gain this skill. Right click to remove from a socket. 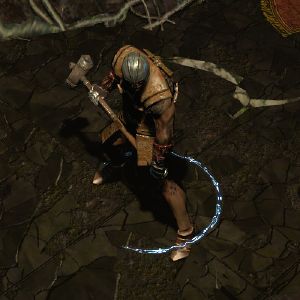 Hatred is an aura that provides extra cold damage based on the physical damage of the caster and their allies and more cold damage.

Self Interaction: Note that the more cold damage part interact with the extra cold damage part, as such, even assuming this is your only source of cold damage, a lvl 20 gem would actually give 25% and 18% of that, hence 29,5% physical as extra cold (31% at lvl 21).

The following may be outdated due to changes in 3.6.0.

Hatred provides additional Cold Damage on Physical Damage, and applies to standard attacks, and spells. Traps and minions are affected only if they are within the range of the aura when they attack/are set off. This is a modifier on damage, so the rules for Damage come in to play. For example,

converts 50% of its Physical Damage to Fire Damage, but because of the rules of Damage Conversion, Hatred will provide its bonus on the pre-converted (full) value. Items that gain damage, such as

, only has the Hatred effect on the physical damage portion.

Because Hatred gives a percentage bonus, it is generally better than

WrathWrathAura, Spell, AoE, Lightning
Radius: 36
Mana Reserved: 50%
Can Store 1 Use(s)
Cooldown Time: 1.20 secRequires Level 24Casts an aura that adds lightning damage to the attacks of you and your allies, and makes your spells deal more lightning damage.Per 1% Quality:
2% increased Area of EffectYou and nearby allies deal (2-16) to (37-248) additional Lightning Damage with Attacks
You and nearby allies deal (15-21)% more Spell Lightning Damage
+(0-19) to radiusPlace into an item socket of the right colour to gain this skill. Right click to remove from a socket.

of the same level, unless the recipient of the aura deals more raw (unconverted) chaos damage such as

Caustic ArrowCaustic ArrowAttack, Projectile, AoE, Duration, Chaos, Bow
Radius: 20
Mana Cost: (6-10)
Cast Time: 1.00 sec
Effectiveness of Added Damage: (55%-64%)
Projectile Speed: 3260Fires an arrow which deals chaos damage in an area on impact, and spreads caustic ground. Enemies standing on the caustic ground take chaos damage over time.Per 1% Quality:
0.5% increased Area of EffectDeals (55-64.4)% of Base Attack Damage
Base duration is 2 seconds
Deals (8.8-1927.1) Base Chaos Damage per second
60% of Physical Damage Converted to Chaos Damage
Modifiers to Projectile Damage apply to this Skill's Damage Over Time effect
+(0-6) to radiusPlace into an item socket of the right colour to gain this skill. Right click to remove from a socket.

or elemental damage such as

ArcArcSpell, Chaining, Lightning
Mana Cost: (8-23)
Cast Time: 0.70 sec
Critical Strike Chance: 5.00%
Effectiveness of Added Damage: 80%Requires Level 12An arc of lightning stretches from the caster to a targeted enemy and chains on to other nearby enemies. Each time the main beam chains it will also chain to a second enemy, but that secondary arc cannot chain further.Per 1% Quality:
0.5% chance to Shock enemiesDeals (6-133) to (33-754) Lightning Damage
10% chance to Shock enemies
Chains +(4-7) Times
(10-29)% increased Effect of Shock
15% more Damage for each remaining ChainPlace into an item socket of the right colour to gain this skill. Right click to remove from a socket.

. However, because of the slow increases in the percentage on a per level basis, it is more efficient to slot Anger or Wrath on a +2 to Aura Gems provided by equipment such as

. For example, at level 20, Hatred provides 36% of damage as cold damage, while at 22, it provides 37%, for a gain of 1%. Anger, at level 20, gives a flat average of 109.5 fire damage, and at level 22, an average of 126.5 damage, for a gain of 17 average damage. So, assuming similar resistances, Hatred would need to be applied on a physical damage of 1700 to beat out Anger. It is better to slot Hatred elsewhere, and save the +2 slots for the more "efficient" Anger and Wrath, if all three auras are being run.

For more information about auras in general, see aura.

The following unique items are related to Hatred:

The following passive skills are related to Hatred:

The following modifiers are related to Hatred: