From Path of Exile Wiki
Jump to: navigation, search
an Azmeri hunter 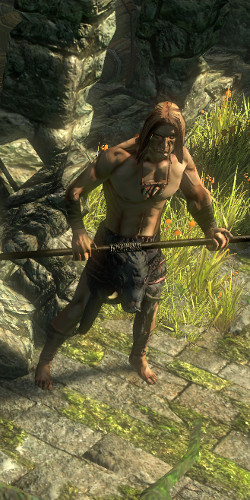 Greust, the stoic warrior of the Azmeri tribe, is an NPC that can be found in The Forest Encampment in Act 2. He also functions as a vendor of weapons and armour, and some PvP match types are accessed through him.

He is very distrustful in nature, suspecting some ulterior motives even when helped. He is also very direct and blunt in his attitude, and seems to pay no attention to words - valuing action, strength and courage above all else.

Greust has little patience for the exiles - foreigners who invade his land and cause trouble for his people. As the protector of his little tribe he regards the exiles with some suspicion and his trust is hard earned. It is not certain what is his exact role in the Encampment, but it is clear he is one of its leaders in hunting and combat, spending most time on these two matters.

There is an obvious strong rivalry and dislike between him and Silk - with each one accusing the other of cowardice and making up their stories about their hunting exploits. He does not seem to like Eramir either, mostly due to the fact that he is also a foreigner and an exile, and mocks Yeena's visions and claims of talking with the spirits, saying "she talks to herself". He is also quite hostile to Helena on her arrival in the Encampment, seeming rather willing to kill her instead of trusting her in any way.

Despite his hard and distrustful character, however, it is clear he cares deeply about the safety of his people, and even Eramir claims that "no man would do more to protect them".

I am Greust. I hunt boar, hunt to feed my people. If you are not a friend of us… you need to run faster than boar.

We are Azmeri. You are not. Eramir is not. Life was good when it was just Azmeri.

Silk is no hunter. Silk scares children with stories at fire time. That Eight-Leg he wears… he did not kill it. Found it in the forest, dead of age. I would like to see Silk face live Eight-Leg one day. See him wrapped up for lunch.

They fall from trees, try to swarm over you like fleas. Their chieftain… stand back when he beats his chest. Bark is worse than bite.

Silk has the mind of a blood monkey! That ‘spear’ stinks of sickness. And you are a monkey too if you believe his story. Stuck in Mother Eight-Leg? More like he dropped it when he ran away from Baby Eight-Leg.

Unclean. Do not eat of the trees surrounding the Chamber of Sins, do not drink of the water, and do not rest. The beasts there look weak, born badly. They are faster, stronger than they seem.

I have no use for Helena’s kind of peace.

This is our home. We hunt, we grow, we build. Your kind in the forest… kill, steal, and burn. Soon they will take it all, leave us no food. Then we must move. Leave our home.

Bandit Lords (all bandits are dead)

You are a hunter of man. Today you have hunted bandits. Tomorrow, when you are restless, will you hunt us? You should go, find another hunting ground. Leave us in peace.

Greust returns in Act 7, where he is no longer present as an ally. It is revealed that he was possessed by the god Ralakesh, who turned the Forest Encampment into a fortress from which he commands his bandits. He needs to be killed, as part of the quest The Master of a Million Faces.

Upon arrival to The Bridge Encampment, it turns out the loss of Greust is mourned, as when an unknown artifact washed up on the shore of The Forest Encampment, he tried to protect his people from it, only to be possessed through it by the god Ralakesh, obsessed with power and domination.

Despite his difficult and blunt character, it is clear he wished to protect his people above all else until the end, as told by everyone across the encampment.

Most surprisingly and despite his initial contempt for her, it turns out Greust and Helena became lovers with deep respect for each other, and she believes it is most likely her that Greust wanted to protect first and foremost. Asking for him to be killed, she believes that he already died the moment Ralakesh possessed him, and what's left of him is only his body.

After he is killed, she asks for his necklace to be brought among his ancestors as the last honour to him, in the quest In Memory of Greust.