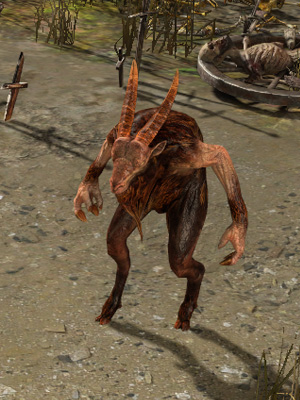 It is said that no matter how ugly a child is, its mother will always love it. That wasn't true of the boy they called "The Fawn". He was born on a cold, moonless night, his birth bed illuminated only by flickering torches. The midwife who pulled him free caught one glimpse of his hairy face and stubby horns, and ran screaming from the tent. His poor mother sheltered and fed him after that, but she was shunned and reviled. Whispers spread that she had consorted with a foul beast to spawn him.

Eventually, The Fawn's mother grew weary of her pariah status, and she took the hideous boy far away, to the cliff side. She meant to cast them both into the ocean, but at the last moment changed her mind. Seizing a large rock, she struck her son on the head, and left him inert and bleeding. However, The Fawn's thick, bony skull took the brunt of the blow without cracking, and he didn't die. The wounded boy attempted to follow his mother back to their encampment, but he got lost on the way, and that was the last anyone heard of him.

But years later, a new menace appeared near the encampment, a terror waiting to waylay anyone attempting to traverse Wraeclast's soaring cliffs. Somehow The Fawn had produced offspring, creatures as twisted and vile as their father. These "men" have a goat's ability to eat anything they encounter, driving them in relentless pursuit of anything edible. They attack from above, smashing their prey underfoot with cloven hooves. Any who survive that assault are pummeled to death by a barrage of savage headbutts. If you hear the bleating of The Fawn, run away.