From Path of Exile Wiki
(Redirected from Global 820)
Jump to: navigation, search 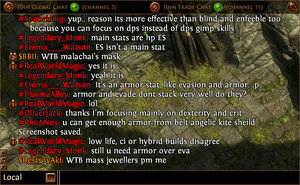 The Chat Console is used to communicate with other players and execute certain commands.

) or press the chat key (mapped to ↵ Enter by default).

To chat with other players, open the chat console and type a message, then press ↵ Enter to send it.

Players can change which chat domain they send messages to at any time by selecting from the drop down menu in the chat console or by appending a message with the appropriate tag character. Additionally there are some chat domains that can be quickly selected by pressing the correct key combination.

To avoid having the chat console fill up with unwanted messages, players can leave global and trade chat by un-ticking the Join Global Chat and Join Trade Chat checkboxes respectively.

Within each league, the global and trade chat domains are made up of separate channels. When joining global or trade chat, players are automatically assigned to a channel. Players can change to a different channel at any time by using the /global <number> and /trade <number> commands. For example, entering /global 3 would allow the player to join global chat channel 3.

/global 820 is a channel for sharing common or uncommon quests that you might encounter in your travels through Wraeclast.

The channel started when Forsaken Masters released, the masters could spawn randomly in areas and to effectively level them it was necessary to share masters with each other. With time it has grown to include challenges, Trial of Ascendancy and other quests that are better to do in large groups.

Users in that channel may use various acronyms to succinctly explain what they're offering. To keep spam to a minimum it is best to avoid repeating what you're looking for frequently.

This is, by far, the most popular global channel.

Various functions can be executed by entering commands in the chat console. The syntax of a command is a forward slash (/) followed by a string. Commands that require additional parameters are appended after the command string followed by a space.

These commands were present in the game previously, but have been removed, or no longer function.