From Path of Exile Wiki
Jump to: navigation, search
Glacial HammerAttack, Melee, Strike, Cold
Mana Cost: 5
Cast Time: 1.00 sec
Effectiveness of Added Damage: (155%-200%)Hits enemies, converting some of your physical damage to cold damage. If an enemy is frozen and is on less than one third life, they will shatter when hit by Glacial Hammer. If striking three times in a row, the third strike will freeze enemies more easily. Requires a Mace, Sceptre or Staff.Per 1% Quality:
2% increased Chill Duration on enemies
1% increased Freeze Duration on enemiesDeals (155-200)% of Base Attack Damage
60% of Physical Damage Converted to Cold Damage
25% chance to Freeze enemies
35% increased Chill Duration on enemies
(10-29)% increased Effect of Chill
+(2-4) to Melee Strike Range
Every third successive strike Freezes enemies as though dealing (200-390)% more Damage
Adds (2-75) to (3-113) Cold Damage against Chilled EnemiesPlace into an item socket of the right colour to gain this skill. Right click to remove from a socket. 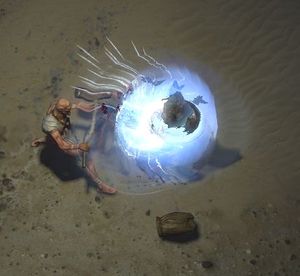 Glacial Hammer is a melee attack that hits the enemy, converting 60% of physical damage to cold damage, with added cold damage against chilled enemies. If the enemy is frozen and is on less than one third life, they will shatter when hit with Glacial Hammer. Every third hit is more likely to freeze enemies. Requires a mace or staff.