Eye of the Storm

Eye of the Storm is the name of the map area of Sirus, Awakener of Worlds. After defeating 4 Conquerors, finishing related quests, Zana will offer an option to open 6 portals to the area.

Unlike The Elder or The Shaper encounters, Zana would not provide any form of skill to assist the player character and the area did not contain any monster other than the boss. There are some friendlies Oriath citizens wandering in the arena proper, which will be killed by Sirus at the start of the fight.

Sirus, Awakener of Worlds, with 2 forms 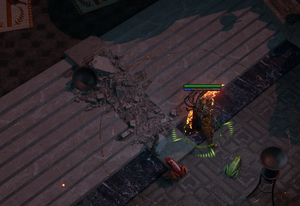 The stairs of the final sub-area, destroyed and able to be walked on.

One notable difference from the town version of Oriath is that (As of Patch 3.9.1) the stair section of the area has been modified - The pillar-like structure has been destroyed, and the player character can walk though the debris.

The area level is scale with the Awakening level of the Atlas, which in turn calculated by number of socketed Watchstones divided by 4, and then round down to the nearest integer.

Your integral anatomical structure is being ripped apart until you die.
Debuff

Your integral anatomical structure is being ripped apart until you die.

The final sub-area of the map is full of Deatomization Storms as environmental hazard. The storms move in a fixed pattern. Upon entering, the storms would apply debuffs to the player character. The boss would also cast a storm as an ending skill of a boss phase. During the boss fight, there is a visible circle to mark a combat area. If the player walk out of the combat area, Sirus also terminate the boss phase and cast the storm where he was standing.