From Path of Exile Wiki
Jump to: navigation, search
Explosive ArrowAttack, Projectile, AoE, Duration, Fire, Bow
Radius: 15
Mana Cost: (8-10)
Cast Time: 1.00 sec
Projectile Speed: 3260Requires Level 28Fires an arrow which will stick into an enemy or wall, and then explode, dealing area damage around it, either after a duration or when the maximum number of arrows stuck to that target is reached. If an enemy has multiple Explosive Arrows stuck in them, the first one to explode will consume the others, adding their damage to its explosion.Per 1% Quality:
1% chance to Ignite enemies
1% increased Skill Effect DurationBase duration is 1 seconds
+2 to Explosion Radius per Explosive Arrow on Target, up to +12
Explosion will have (47-522) to (71-783) added Fire Damage
Explosion deals 50% less Base Damage
Explosion deals 3% more Damage with Hits and Ailments per Explosive Arrow on Target
Maximum 20 Explosive Arrows stuck in an EnemyPlace into an item socket of the right colour to gain this skill. Right click to remove from a socket. 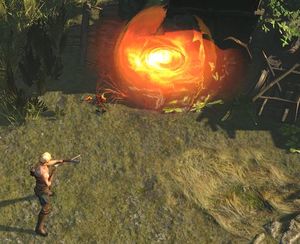 Explosive Arrow has two separate damaging effects: an attack and an explosion.

Attack: The Explosive Arrow attack is an arrow which deals weapon damage based on the bow equipped. This component of the skill is affected by any modifiers to bow attacks. At the final destination of the arrow, one of three effects will occur:

Explosion: When the debuff Hit by Explosive Arrow, or a fuse stuck on terrain expires, it causes an explosion based on the number of fuse charges. This damage is area projectile fire damage, which is also considered bow damage and will scale with sources of weapon damage, bow damage, etc.

If the arrow that applied the Hit by Explosive Arrow debuff is a crit, the explosion will also crit. While subsequent arrows which have crit will apply its total damage to the explosion after critical strike modifiers, the explosion itself will not crit.

Duration: Modifiers to duration, such as from

Less Duration SupportLess Duration SupportSupport, Duration
Icon: d
Mana Multiplier: 120%Requires Level 31Supports any skill that has a duration.Per 1% Quality:
Supported Skills have 0.5% less Skill Effect DurationSupported Skills have (40-49)% less Skill Effect Duration
Supported Skills deal (10-19)% more DamageThis is a Support Gem. It does not grant a bonus to your character, but to skills in sockets connected to it. Place into an item socket connected to a socket containing the Active Skill Gem you wish to augment. Right click to remove from a socket.

Totem: Ballista Totems will execute this attack until the targeted enemy dies, instantly triggering the explosion, or until the totem is destroyed, causing the applied Fuse Charges to last their remaining duration before exploding.

Cite error: <ref> tag defined in <references> has group attribute "" which does not appear in prior text.
Retrieved from "https://pathofexile.gamepedia.com/index.php?title=Explosive_Arrow&oldid=608574"
Categories:
Hidden categories: