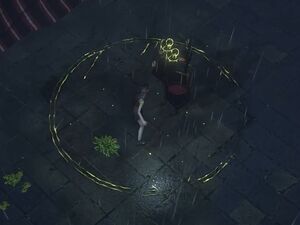 You are cursed. You deal less damage and have reduced accuracy.

Enfeeble is a hex spell that curses all targets in an area, lowering their damage and accuracy. Enfeeble does not reduce the amount or accuracy of reflected damage,[1] because reflect is not based on defender's stats. Enfeeble is an intelligence gem (blue) despite its green icon art and green debuff.

Enfeeble is one of the hex curses that can be rolled on maps and vaal side area (known as "secret_area" in spawn weight), the curses affect the entire area and can be removed by having curse immunity (from items or flasks). The base magnitude of the

Enfeeble debuff is the same as level 1 Enfeeble gem,[2] but further scaled by the map or area mod with #% increased Effect, which that part of the map mod is further affected by Atlas Awakening bonus objective completion:

The following mod can be found in legacy maps:

On top of monster with above listed monster mod, the following monster also use Enfeeble:

The following monsters use their own version of Enfeeble skill:

Doedre's Withering are not the same debuffs, despite all have the effect that dealing less damage.