From Path of Exile Wiki
Jump to: navigation, search
Elemental HitAttack, Projectile, Melee, Strike, Fire, Cold, Lightning, AoE, Bow
Mana Cost: (7-11)
Cast Time: 1.00 secRequires Level 12Each attack with this skill will choose an element at random, and will only be able to deal damage of that element. If the attack hits an enemy, it will also deal damage in an area around them, with the radius being larger if that enemy is suffering from an ailment of the chosen element. It will avoid choosing the same element twice in a row.Per 1% Quality:
1% increased Elemental Damage(22-480) to (40-891) Added Fire Damage
(18-392) to (33-729) Added Cold Damage
(4-77) to (67-1465) Added Lightning Damage
(30-49)% chance to Freeze, Shock and Ignite
10% more Damage per Elemental Ailment on the Enemy
80% more Area Radius against Enemies affected by an Ailment of the chosen Element
Only Deals Damage of the chosen Element
Deals no Damage of other Damage Types
+(0-2) to Melee Strike RangePlace into an item socket of the right colour to gain this skill. Right click to remove from a socket. 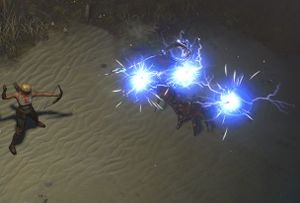 Elemental Hit is an attack skill which performs a basic attack that deals added damage of a random element in an area. It has more damage and area of effect against enemies affected by the corresponding elemental ailment. Elemental Hit can be performed with any weapon, or with no weapon equipped.