From Path of Exile Wiki
Jump to: navigation, search
Beastmaster 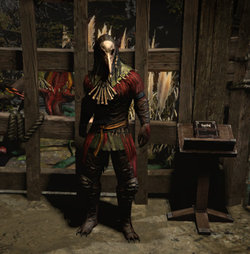 Einhar Frey is a major NPC as well as a master.

Einhar can also be found in the Menagerie, where you can use captured beasts for beastcrafting. He also sells

Bestiary OrbsBestiary OrbStack Size: 10Stores a Beast in an item so it can be tradedRight click on this item then left click on a Beast in your Menagerie to turn it into a tradable item.
Shift click to unstack.

to itemize beasts for trading.

When a beast is brought to low health, Einhar will appear. He is an invulnerable NPC and attacks with ranged shots, as well as a volley of shots and bombs. He also has an aura that grants life leech and life gain on hit and kill. Einhar will throw a net at weakened beasts, capturing them and moving them to the Menagerie. Beasts cannot be killed.

Once all beasts in the zone are captured, the mission is complete and Einhar will leave the area.

To level up Einhar, capture monsters in the Bestiary:

Capturing monsters that have previously been captured does NOT count towards this. Players can view what they've already captured by opening the Challenge/Achievements Panel (default key "H") and navigating to the "Bestiary" tab. [1]

That look in your eye... I recognise it. A survivor, just like Einhar.

That is my name, exile. Einhar. In my native tongue it means 'lone fighter'. That is what Einhar was for many years.

But it is dangerous now to fight alone. Too dangerous, even for the mighty Einhar. We are in the final days of this world, exile. Of that, I am sure.

The animals in this land are sick. Sick in the body and sick in the mind. I have never seen such a sickness before. Only one thing can be done. We survivors must prepare for the end, and delay its arrival as long as we can.

For that we will need supplies. Weapons. Shelter. Food. This is where you come in.

You want to know Einhar's past? That is Einhar's business. No one else's.

They were the first survivors. The First Ones showed my people that to win, you must outlast. They left this world long ago to seek other survivors, but they will return. And when they do, I will join them in the Great Grove. And you will join Einhar, yes? Yes.

It will surprise you to learn that I am not popular. The others here are ignorant. They do not see the end coming. They are not survivors like me... Or you.

Before we met, I kept beasts in the encampment. They got into the grain, then the meat. They were not as picky as Einhar about where they did their business. I learned that Rhoas do not digest Rhoa meat very well.

So I moved them to a new location. The Menagerie. Far away. It is a secret place. This is where we will perform the ritual for the First Ones. I have built a Blood Altar for such a purpose.

Do you wish to see it? Tell Einhar. You will be taken there.

Not all beasts were born equal, survivor. The First Ones look upon some captures and sacrifices more fondly than others. You may not even deem some beasts worthy of sacrifice!

Do not worry. Einhar has imbued some Orbs with powerful blood magic. You can use these Bestiary Orbs on any beast in the Menagerie and the beast will be bound to the Orb. Then you can do whatever you want with it. Give it to a handsome man like Einhar, maybe? You cannot tell, but I am very handsome under this mask.

Once a Bestiary Orb contains a beast, you can use it again to release the creature to the Menagerie. Be careful, though, it will break the Orb.

I love Alva! She is a student of blood thaumaturgy, just like Einhar. And she is collecting things, just like Einhar. But where I collect things so that we may survive the end of the world, Alva collects things from people who did not survive the end of the world already! It is as if we are two heads on the same hound, but her head is where the butt should be!

She is so mysterious, exile. And I love mysterious! She told me all her friends disappeared, which also happened to Einhar! She thinks her friends are dead, but I don't think my friends are dead. They disappeared after I cracked open a buck's skull while we were eating and plucked out its brain. We weren't even eating venison! I don't even remember where I found the buck! That was a wonderful birthday.

Einhar loves Zana! Her hair reminds me of the inside of a Devourer, all red and stringy. She says many things that I do not understand, and marks down locations of places I have never been, even though I have been everywhere! So mysterious! Einhar loves mystery and locations. She has not seen her father in a very long time, so I try to be her father. I try to feed her meat as red as her hair. "This will keep it red and stringy!" I say, and she tells me to close my eyes while she eats it. It is so red and stringy, it must be working!

The blackguard girl? Einhar hates blackguards... but I loooooove Helena! She is great at finding places to hide. I like to try and find her and then I hide and wait for her to find me! And she never can! Always I win! ...Now that I think about it, I do not think she knows to look for me. Maybe next time I should tell her before I hide.

Oh yes, the revenant. Well... I love her. She reminds Einhar of the great, feathered Saqawal. I like to sneak up behind her as if she was Saqawal and I were Einhar, and I try to pounce like Einhar would pounce. Every time she steps out of the way and I fall on the ground like a silly Einhar! Even when I am as quiet as dead cat! How does she do it?

Welcome to Einhar's menagerie, exile. This is where I keep the beasts we capture. Do not worry about their wellbeing -- I do not think they will worry about yours!! Haha! A little humour for you.

But seriously, exile, Einhar takes very good care of the beasts we capture. I feed them, clean them, and read them the poems I write. Then, when you are ready, we slaughter them at the blood altar, to prove to the First Ones that we are worthy of survival. That part is not so friendly to beasts, but if you read my poetry, you may consider it an act of mercy. Hahaha! Again, humour! My poetry is great.

Please, look around! Take your time! But do not feed the animals. That is Einhar's job.

The end is coming, exile. Of that, I am sure.

When the end arrives, we must be ready. The First Ones will return. They will bring the survivors with them to the Great Grove. We must prove we are worthy. We must sacrifice the beasts we find at the Blood Altar.

Feed the altar the blood of these beasts, and the First Ones will bless us. And, perhaps, reveal to us their secrets.

Saqawal, First of the Sky

During a cold winter, Einhar camped on a mountain. I have many furs to keep me warm in the cold. ... I did not bring them. But I did have Rhoa ooze. While sipping warm ooze, Einhar had a vision. A lizard, feathered and crimson, watching from shadows of shadows.

An avatar of the First Ones. A test. Saqawal, First of the Sky. In my cup, ooze swirled. Another vision, in the blood of the birds and reptiles. It is lucky I had so much to drink that night, or else this secret may have remained a secret.

Find many birds and reptiles, Exile. The path to the First of the Sky is in their blood.

Farrul, First of the Plains

Beneath the hot sun, Einhar saw a swirl of red and white. A flash of teeth. Farrul, First of the Plains, an Avatar of the First Ones. I pursued it, and as night fell, so did I... right into a Hellion pit. I drank my fill of Hellion blood that night. That is how I learned I do not like Hellion blood.

It is also how I learned that Farrul's secrets lie in the blood of hounds, cats, and others of warm blood. Go, find many, and we will find Farrul.

Craiceann, First of the Deep

Einhar has many talents. You will learn. I sailed to Wraeclast alone, a risky and brave feat. You are impressed, yes?

My boat was small and not well prepared for the journey. Then my ship ran aground... but there was no ground. Very confusing. Water all around, but the ship could not move. My food spoiled quickly. I am very good at fishing. I will have to show you how some time... maybe. I caught many fish. And crabs. And squid. I ate very well, but there was little water. I had booze. I threw the scraps to the sea.

Then... the ship moved. Lifted. I looked aft. A crab, massive and red, stood on a lone rock, covered in my scraps. It was Craiceann, an Avatar of the First ones.

Einhar knows the secret of Craiceann. It lies in the bellies of the sea creatures. Find them, and we will see Craiceann again.

Fenumus, First of the Night

I walked in total darkness by touch until... a light. Then two. Then many! So many lights! I got closer and closer. The lights got brighter and brighter. Then... I slipped. I fell very far. Einhar was sure he was dead. But then I was caught... in a web. The lights moved and swirled. Insects. And in front of them was a shadow of a spider. Fenumus... An Avatar of the First Ones.

Her web was strong, but Einhar's blade was stronger. I cut myself free. Into the river below. Washed to shore. A fun adventure.

The path to Fenumus is in the blood of bugs. Spiders. Insects. Carrion queens. Get them, and Fenumus will follow.

"Hunt or be hunted, exile!"

"This one is caught. Einhar will take it!"

"You are caught, beast! You will either be a survivor, or you will be food!"

"We will be best friends beast, until we slaughter you!" [Laughs maniacally] (3.5 Betrayal)

"Do not worry little beast, we are friends now!"

"Oooh, that was a juicy one exile!"