From Path of Exile Wiki
Jump to: navigation, search
EarthquakeAttack, AoE, Duration, Slam, Melee
Radius: 18 / 28
Mana Cost: 10
Cast Time: 1.00 sec
Attack Speed: 75% of Base
Effectiveness of Added Damage: (85%-120%)Requires Level 28Smashes the ground, dealing damage in an area and cracking the earth. The crack will erupt in a powerful aftershock after a short duration. Cracks created before the first one has erupted will not generate their own aftershocks. Requires an Axe, Mace, Sceptre, Staff or Unarmed.Per 1% Quality:1Superior2Anomalous3Divergent4Phantasmal1% increased Damage3% increased Damage
1% increased Skill Effect DurationInitial Slam has 2% increased Area of EffectIncreases and Reductions to Spell Damage also apply to Attack Damage from this SkillDeals (85-120)% of Base Attack Damage
Base duration is 1 seconds
Aftershock deals 150% more Damage with Hits and AilmentsPlace into an item socket of the right colour to gain this skill. Right click to remove from a socket. 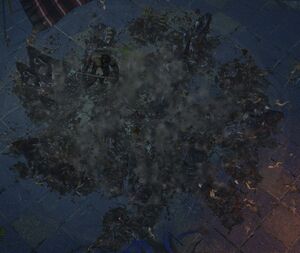 Earthquake is a melee attack dealing damage in an area and leaving a crack in the ground. After a duration, the crack releases an aftershock, dealing more damage in a larger area. Requires an axe, mace, staff or unarmed.