He is the High Templar, the highest rank of the order of the Templars, which appear to be the rulers of the theocracy of Oriath. Dominus also controls the Ebony Legion. His name is Latin for "Lord" or "Master".

The Dominus fight can be a tough and complicated encounter, and it is important to have capped resistances, most importantly lightning resistance. Instant-healing (seething/bubbling) life potions, resistance flasks and granite/jade flasks are extremely helpful during this fight. There are various stages to this encounter, each of which has different mechanics and strategies. If you are playing on a hardcore league, it is advisable to bring Portal Scrolls to this fight to replenish your potions during the fight, and to allow a quick escape should that be necessary.

Initially, Dominus himself will not fight. Instead, he will send three unique Legionnaires to fight for him:

During this period, regular legionnaires will also enter the fray alongside the uniques, until all three uniques are dealt with. This phase should not be too difficult if the player isolates the uniques from each other and deals with them one by one. None of the uniques is particularly formidable on their own.

After these three bosses are defeated, the next three minibosses will enter the arena. Each one is a unique Miscreation, similar to the ones found in The Lunaris Temple:

Combined, these three uniques might pose a threat, but again, isolating them and dealing with them one by one should allow the player to complete this phase with minimal risk. 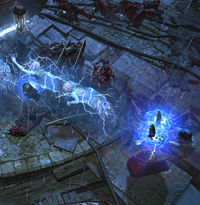 After all minibosses have been defeated, Dominus will descend to the arena and fight alongside the miscreations from the previous phase which will continue spawning until the very end of the fight. If the miscreations annoy you, you can lure Dominus to a relatively quiet spot on the roof and deal with him there, though he will still move around a bit, possibly causing you to attract some of the miscreations anyway. He has both a sizable life pool and a comparatively small energy shield. He has various attacks, each of which is quite dangerous in its own right and can be anticipated through various things Dominus says before using them. The attacks are: 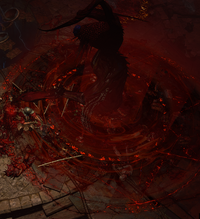 Killing Dominus grants you an achievement, depending on the character class played.

Upon entering the vicinity of Dominus on the highest level of The Upper Sceptre of God (depends on which class you play):

When the second unique boss trio is defeated: Have you ever seen the true face of god, exile? (Play)

Occasionally: "Shrink not from god!" (Play)

When casting his Thunder Punch: The touch of God! or The light of divinity! (Play)

Occasionally, when attacking/marking a player: Die! (Play), Die in awe! or Nightmare prevails!

Upon killing Dominus in his first phase: This world is an illusion, exile.

The following divination card can drop from this monster: