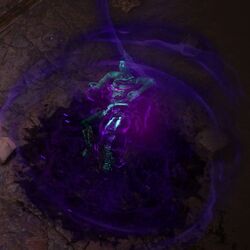 Deshret, the Red Sekhema, was the Maraketh leader who ventured into Wraeclast to fight the Beast. It found the entity's resting place inside the mountains near Highgate, but, instead of destroying it, Deshret used her banner to seal the entrance to the Beast's lair, and then charged her followers to guard it. Despite not dying inside the Mines, her spirit was captured after her death and she spent centuries being tortured by Malachai's Godless Three – Doedre, Maligaro and Shavronne. She's also Kira's ancestor.