You are taking Chaos Damage while standing on Desecrated Ground 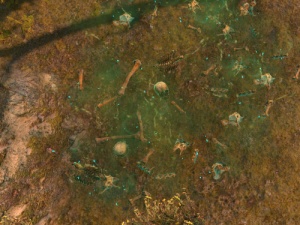 Desecrated Ground is a detrimental ground effect that deals chaos damage over time. The amount of damage per second inflicted by desecrated ground depends on its source. It is similar to caustic ground, which both deal Chaos DOT.

Map and vaal side area mods

Desecrated ground is one of the map mods that can be rolled on maps and vaal side area (known as "secret_area" in spawn weight table):

The magnitude of the chaos damage varies depending on the map tier:

The following map mods can only be find in legacy map item in permanent leagues:

The magnitude of the chaos damage varies depending on the map tier and which legacy mods:

The magnitude of the chaos damage varies depending on depth:

CortexCortex
Relic Chambers MapMap Level: 83
Map Tier: 9
Item Quantity: +100%
Monster Pack Size: +25%100% increased Experience gain
Monster Level: 83
Map has (3-5) additional random Modifiers
Map has (2-4) additional Synthesis Global ModifiersThough my life is gone, my purpose is not.
My will remains, emboldened and empowered by the righteousness of my cause.Travel to this Map by using it in a personal Map Device. Maps can only be used once.