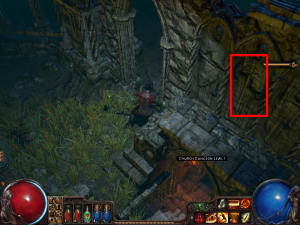 The Descry above the entrance to The Crypt Level 1 in Fellshrine Ruins.

Descry is a symbol used by an in-game faction.

If you ask Eramir in the Forest Encampment about the Fellshrine Ruins, he says:

The Fellshrine is a shadow of what was once good in Wraeclast.

That sigil etched into its stones? It's a Descry, from when the Templar truly stood for something. To the ancestors of Oriath, the Descry was a flickering torch in the night. A source of inspiration and comfort.

Sad thing about torches... they go out.

This symbol is used in various contexts in the game, consistent with the idea of it symbolising divinity or holiness.

The descry is featured on Path of Exile's microtransaction points, where they are the only symbol on a gold coin.

Another modified Descry (with the middle bar split) is shown above the player when they invoke the Immortal Call that have Dark Immortal Call mtx.

Tempest ShieldTempest ShieldSpell, Lightning, Chaining, Duration
Mana Cost: (7-16)
Cast Time: 0.25 sec
Critical Strike Chance: 6.00%
Effectiveness of Added Damage: 60%Requires Level 16Enchants your shield with the power of storms, which lashes out to deal arcing lightning damage to attackers when you block them. Blocking refreshes the duration of Tempest Shield.Per 1% Quality:
1% increased Lightning DamageDeals (24-284) to (36-426) Lightning Damage
+3% Chance to Block Attack Damage while holding a Shield
Chains +1 Times
Base duration is 12 seconds
+3% Chance to Block Spell Damage while holding a ShieldPlace into an item socket of the right colour to gain this skill. Right click to remove from a socket.

The Descry is projected onto the ground around a Vaal Totem with the "Allies cannot die" aura.

Although there are a few patterns and the occasional face carved into the stone of The Fellshrine Ruins, there are no symbols except for the one directly above the entrance to The Crypt Level 1, where a figure is depicted holding a shape with three vertical lines and two curved lines.

The Descry is prominently displayed on one of the notes on the Noticeboard in each town.

The Descry is carved above the entrance of the Catacombs in Sarn.

Various areas of Act 5, 10 and the Epilogue are decorated with the symbol. In the lore these areas are part of the Oriath.

A slightly-modified Descry (with the middle bar split) is part of the Consecrated Ground effect.

It also shown in the 2D art of the

Sulphur FlaskSulphur FlaskLasts 4.00 Seconds
Consumes 20 of 60 Charges on use
40% increased DamageRequires Level 35Creates Consecrated Ground on UseRight click to drink. Can only hold charges while in belt. Refills as you kill monsters.

which creates Consecrated Ground, but not-modified (without the middle bar split)

The icon of the passive skill Sanctuary has a slightly-modified descry symbol on it.

Sign of PuritySign of PurityWrought from blood and gold, Innocence fashioned a weapon of tempered purity,
capable of banishing darkness, and bringing order to the chaos in men's hearts.

is similar to the Descry symbol. 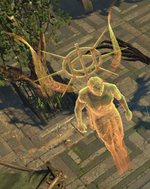 Innocence in the Epilogue 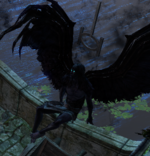 Sin in the Bridge Encampment