You are taking damage from Lunaris's Dark Vortex. 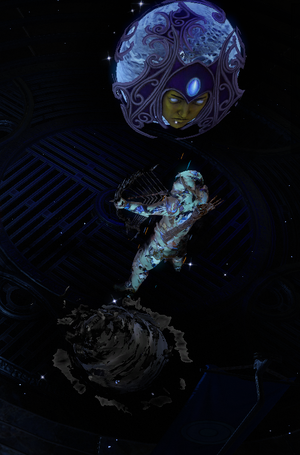 Lunaris, Eternal Moon, in Celestial Form, and Dusk, Harbinger of Lunaris, covered in Ash , and a Dark Vortex on the foreground.

In the first fight, Lunaris, Eternal Moon, in the Celestial Form (or known as "orb form"), is suspended in the centre of the boss arena, and occasionally casts a vortex that inflicts "Dark Vortex" debuff when stepped on.

While in the second fight, after damaging Lunaris, Eternal Moon to a certain health remaining, Lunaris will return to its orb form and cast Dark Vortex to aid Solaris, Eternal Sun.

Moon Temple MapMoon Temple MapMap Level: 70
Map Tier: 3
Guild Character: =Night's promises are dark, for even the stars must be harvested.Travel to this Map by using it in a personal Map Device. Maps can only be used once.

The Twilight TempleThe Twilight Temple
Moon Temple MapMap Level: 76
Map Tier: 9
Guild Character: ^
Item Quantity: (+75%-+100%)
Item Rarity: (+125%-+175%)
Monster Pack Size: (+25%-+50%)Area has increased monster variety
Area is inhabited by Lunaris fanatics
Area is inhabited by Solaris fanatics
Players are Cursed with Flammability
Players are Cursed with FrostbiteIn the shadow of war,
all are eclipsed.Travel to this Map by using it in the Templar Laboratory or a personal Map Device. Maps can only be used once.

[2] (the pressure plate mini-boss fight and when selecting Selenia, the Endless Night as final map boss).