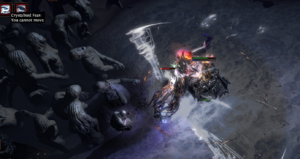 Elder casting Crystalised Fear. Note that Shaper was at the back.

). While in the fan-shaped Area of Effect, the player takes physical damage over time from the Fed Upon debuff. After a few seconds, The Shaper will attack the Elder and unfreeze the player in the process.

The status icon of Crystalised Fear is called "ElderSuperSiphon.dds" in the game file, while the two debuff icons from the normal Elder's siphon skill Sprouting Madness and Fed Upon are called "ElderSiphon.dds".