From Path of Exile Wiki
Jump to: navigation, search
CleaveAttack, AoE, Physical, Melee
Radius: 20
Mana Cost: 6
Cast Time: 1.00 sec
Attack Speed: 80% of Base
Effectiveness of Added Damage: (125%-170%)The character swings their weapon (or both weapons if dual wielding) in an arc, damaging monsters in an area in front of them. Only works with Axes and Swords.Per 1% Quality:
0.5% increased Attack SpeedDeals (125-170)% of Base Attack Damage
When Dual Wielding, Deals 60% Damage from each Weapon combined
(2-75) to (3-113) Added Attack Physical Damage
+(0-6) to radiusPlace into an item socket of the right colour to gain this skill. Right click to remove from a socket. 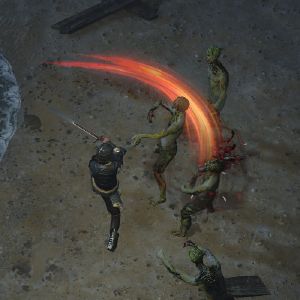 Cleave is a melee attack that deals damage with all equipped weapons to enemies in a 180 degree arc in front of the player. When dual wielding, equipment requirement applies to both weapons, and each weapon does reduced damage. Requires an axe, sword, two-handed axe, or two-handed sword.