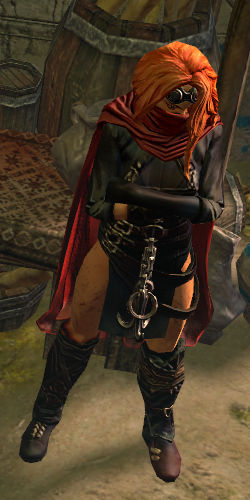 Clarissa is an NPC in Act 3 and Act 8. She can initially be found in The City of Sarn, and later permanently in The Sarn Encampment (after talking to her once in the City of Sarn). When the player finds her in the City of Sarn during the Lost in Love quest, she is being guarded by several Blackguard soldiers. After dispatching those, she tells the player that Piety captured her and her boyfriend, Tolman, while they were out in the slums, and requests you investigate what happened to her friend who was taken to the Crematorium. She rewards the player with the Sewer Keys upon bringing Tolman's Bracelet to her, allowing the player to progress with the main story (as well as opening up the Victario's Secrets side quest). She seems to care a great deal for Grigor out of pity for his condition, though he would rather she left him alone.

She was raised by Hargan, who took care of her and her family after they were ruined and were forced to move to Theopolis, the Oriathan capital.

You’re alone. So Tolman’s… You didn’t go to the Crematorium? No, of course you didn’t, this isn’t your fight. I’m sorry. It was wrong of me to put that on you, to ask you to risk your life for someone you don’t even know.

Don’t worry. I’ll work something out. I always do.

We were never game to test his theory, not with the Undying down there. But you’re strong… stronger than any of us here. I don’t think you need to fear the dark.

You’re alone. So Tolman’s… You didn’t go to the Crematorium? No, of course you didn’t, this isn’t your fight. I’m sorry. It was wrong of me to put that on you, to ask you to risk your life for someone you don’t even know.

Don’t worry. I’ll work something out. I always do.

Maramoa? I've heard that the Karui have this philosophy... makanui, the Way of the Warrior. I don't think you could get any more makanui than her. She took it upon herself to look after me... before Tolman arrived. Saved my skin more than once. I'm fine with that. Beats being on her bad side.

Hargan likes to think he was my kind, old 'uncle' back in Theopolis. Granted, the work he gave me saved my parents and me from starvation. This was after my father lost the family fortune on the card table and we had to give up the manor in the country for a flea-box in Theopolis. But he's not half as generous as he makes out. When Hargan gives you something, you can be damned sure that he's getting his pound of flesh in return.

No-one should have to go through what Grigor has. I help him as much as he'll let me, but he's a proud one... and so he should be. He's survived what has destroyed... too many of us. 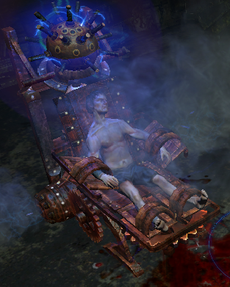 Clarissa's boyfriend Tolman was tortured to death by Piety in the Crematorium.

Tolman… what did she do to you…?

Halfway across the world and yet the tie between Vinia and I endures. That wasw Piety’s real name back in Theopolis, before her rise to greatness.

Vinia sold her thaumaturgy in the day, her body at night. Sought after, she was. Enough so to become one of my best buyers.

But money never meant much to Vinia. No, she was striving for something better… nobler. Used to tell me that “Life needn’t be this hard. It’s time you all realized that.”

I bet she fed Tolman the same bloody line.

Wherever he is, I’m sure Tolman knows what you’ve done. I know you didn’t do it for him, or for me. It doesn’t matter. Piety’s reign of cruelty is over. Thank you.

Vinia was arrested for 'Consorting with the Unholy' and condemned to the pyre. This was before the banishments. Dominus shared a last supper with her, heard her confession. Most think Vinia earned Dominus' patronage on her back. I don't. Vinia gave Dominus her 'better life' and got a new name in return. You can count on one thing: Piety's grand future won't include the likes of you, me, or Tolman.

You find a high enough spot and you can see the Lunaris Temple over the river, at the western edge of the city.

Since the Blackguards arrived, the clouds above that temple have been stained with the blackest of smoke. You can see it sometimes when the westerly blows. It stinks worse than death.

Gravicius dined with us once. This was before my father's gambling debts caught up with him. I dined with him again, in Theopolis prison, the night before my exile. He wasn't so polite that time... Thank you. That's one memory I can put to rest.

On the fall of the Empire, the historians are deathly silent. After the Purity Rebellion, the Kingdom of Kaom blockaded Oriath, preventing any trade or correspondence with the mainland. It's said that Kaom planned to invade. Only when the Karui retreated did Oriath get any news from Wraeclast, but by that time there wasn't really anyone left to tell the tale.

I know, so strange that stone and metal should move and live as you and I. Still, I read that Chitus' sculptors used to soften their materials with 'thaumetic sulphide', a by-product of gem refining. It's the only connection that I can fathom between the cataclysm and the living sculptures of Sarn.

Chitus thought that the Gemling was the pinnacle of human progress. "These glorious gems have brought us within spitting distance of godhood", he once said. The High Templar as the time, Voll of Thebrus, thought they were a perversion. He wanted the Empire made pure, "cleansed of the stain of thaumaturgy". You look at Sarn and tell me which one you thought was right. And while you're out there, look out for monkeys. No, not those bloody monkeys from Phrecia. These ones are painted on the walls. I think you'll find them enlightening.

Sarn is changing and so are we who live here.

There there, Tolman, don’t you worry. I love you. I’ll think of something.

You told me Tolman was gone. You were wrong! I found him...

No, Tolman, I never gave up on you.

His soul remains, flickering deep down inside.

Oh, Tolman, I know you're in pain, but it'll be over soon. I promise.

My heart aches for Grigor. I know the battle in which he is engaged. It's like my own, a fight to make sense of life in a land that deems life to be worthless.

I don't know where he's gone, but I do know he's looking to find himself, his true self, as we all must do in our own time.

By all accounts, Tarcus Veruso was a ruthless despot, a man to rival even the likes of Dominus. Yet his heart of stone contained one precious seam, his love for his wife, Chiara.

So when the poor young woman died giving birth to Veruso's son, Caspiro, the grieving emperor threw aside his great convictions and placed his last hope in thaumaturgy, in the Ankh of Eternity.

Perhaps it was shame that drove Tarcus to lock the ankh away, to steal such hopes from his descendents It was he who had asked his people to turn their backs on the ancient arts, so what right had he to enjoy that which he forbade? Love gave him that right.

The Ankh of Eternity

As l understand it, the Ankh of Eternity was somehow able to return the dead to the full bloom of life. There was nothing necromantic about it, rather it was a source of true resurrection.

How it came to exist, I honestly don't know. A couple of inscriptions I read treated the ankh as some sort of gift to Veruso from the Vaal. But surely the Vaal were long gone by Veruso's time... weren’t they?

No matter. Despite the vagaries of the Ankh's origins, Veruso used the Ankh to return his young wife from the death bed to the wedding bed. The accounts are unanimous on that point.

As it was for Veruso's love, so shall it be for mine.