From Path of Exile Wiki
Jump to: navigation, search
This page is about the game mechanic. For the league, see Breach league.
For the divination card, see The Breach.

Breaches are timed monster-spawning portals. They have about a 10% chance to appear in any map area. 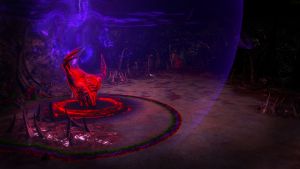 Breaches will randomly spawn in an area in an inactive state. They're easily identified by the hand-like construct within a purple circle (see image) and purple swirls can be seen within the vicinity. Walking into the hand will activate the breach. Breaches can also be spawned using

Vaal BreachVaal BreachVaal, Spell
Souls Per Use: 100 (N) /
Can Store 1 Use(s)
Soul Gain Prevention: 40.000 sec
Cast Time: 2.50 secRequires Level 10Creates a breach, making you vulnerable to its powerful inhabitants.Per 1% Quality:
3% increased Cast SpeedMonsters from the Breach do not grant Experience or drop Items
CorruptedPlace into an item socket of the right colour to gain this skill. Right click to remove from a socket.

, but enemies in these breaches do not give experience or drop items.

Active breaches will expand their circle outwards and spawn a mix of breach monsters within the circle; the faster the monsters are killed the faster the circle expands. After a while, the expansion of the breach will slow down until it eventually retracts quickly and closes.

Breaches stay open for a minimum of 30 seconds, increasing to a maximum of 60 based on how quickly breach monsters are killed. Normal monsters killed while in the breach do not increase the active time.

Monsters moving outside of the active radius will despawn after a short delay. During this time, however, it is still possible to attack and be attacked by the monsters before they're removed. It is also possible for monsters inside the breach to hit the character while they are outside it.

Breach monsters have increased item rarity and quantity, but have a reduced chance to spawn beyond monsters and only rare breach monsters are able to drop maps. In addition there is a chance to obtain breach-specific unique items and splinters from these monsters as well as breach-exclusive

Breaches also contain "Clasped Hands", a breach-specific type of chest. They come in two varieties, "Clasped Hand" or "<Breachlord>'s Clasped Hand". These chests can drop additional splinters and can only be opened when the breach expands to them. It is possible to see Breachlord specific Clasped Hands before opening the breach itself as a shimmering transparent object. 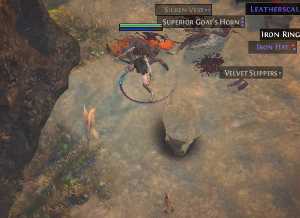 a Breachlord's Clasped Hand is barely visible before opening the breach

There are fives types of breaches each associated with a damage type, which will affect accordingly

Breaches have a 10% chance to occur in maps by default. There is also a Sextant mod, available at all tiers, that adds a Breach to affected maps, which stacks with the base 10% chance.

There are two types of currency and one other item class associated with breaches; each is specific to a breach type for a total of 15 currency items.

Splinters are dropped by Breach monsters or Clasped Hands within breaches. 100 Splinters of the same type can be combined into a Breachstone.

There is currently an issue with the currency tab; if you remove a stack of 100 splinters they will not upgrade to a Breachstone. In order to fix it, remove a single splinter and put it back on the stack.

Breachstones are obtained from combining Splinters. They can be put into a map device in order to enter the associated domain of a Breachlord.

The domain of a Breachlord is an unique area that contains one single large expanding breach and the domain's unique boss at the end. The breach is only active for a limited time that can be extended by killing breach monsters. When the boss area is reached the timer will stop; which allows for fighting the boss at any pace or picking up items that were left behind. Letting the timer run out before the breach fully expands will permanently collapse it for that instance.

Blessings are occasionally dropped by Breachlords. They can not be obtained outside of the Breachlord's domain, and are not guaranteed to drop.

Blessing can be used to upgrade Breach unique items to a more powerful version of the item.

Since the breaches can spawn a very large number of monsters that hit hard is advisable to be cautious when opening breaches; death can come quickly and without warning.

Strategies (not all may be suitable for your build):