From Path of Exile Wiki
Jump to: navigation, search
Blast RainFire, Attack, AoE, Projectile, Bow
Radius: 24
Mana Cost: (8-10)
Cast Time: 1.00 sec
Effectiveness of Added Damage: (30%-36%)Requires Level 28Fires arrows up in the air, to rain down in an area. Each arrow deals area damage around where it lands, and they will all overlap on the targeted location.Per 1% Quality:
0.5% increased Area of EffectDeals (30-35.599999999999994)% of Base Attack Damage
100% of Physical Damage Converted to Fire Damage
Fires 5 additional Arrows
Penetrates (15-25)% Fire ResistancePlace into an item socket of the right colour to gain this skill. Right click to remove from a socket. 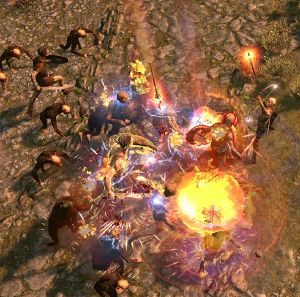 Blast Rain is a bow attack skill that fires an arrow up in the air, which splits and rains down in a series of explosions over an area.