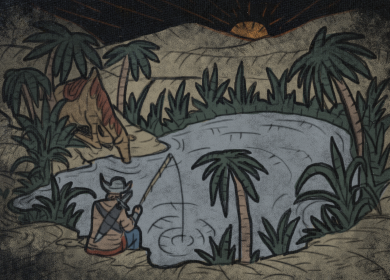 Baited Expectations8Fishing ItemThe line between having not enough to do and too much to do is unusually fine.Acquisition
Level: 1Sell Price
1x Scroll FragmentMiscellaneous
Item class: Divination Card
Metadata ID: Metadata/Items/DivinationCards/DivinationCardBaitedExpectations

Baited Expectations is a divination card. A set of eight can be exchanged for a random unique fishing item.

A group on Reddit inspected the outcome of the divination card by opening themselves or handing multiple stacks to streamers such as mbXtreme or Slipperyjim8.[1] Based on mbXtreme's video, the outcomes are weighted. Out of 60 sets, he got 4

Song of the SirensSong of the Sirens
Fishing RodFishing Rod
Quality: +20%
Physical Damage: 8.4–15.6
Critical Strike Chance: 5.00%
Attacks per Second: 1.20
Weapon Range: 13Requires 8 Str, 8 DexSiren Worm Bait
(50-40)% reduced Quantity of Fish Caught
(50-60)% increased Rarity of Fish Caught
You can catch Exotic FishGive a man a fish, and you can feed him for a day.
But give a fish a man, and you can feed it for a month.

Fairgraves' TricorneFairgraves' Tricorne
TricorneQuality: +20%
Evasion: 100Requires Level 12, 27 DexAdds 6 to 12 Cold Damage to Attacks
70% increased Evasion Rating
15% increased Stun and Block Recovery
+(15-30) to maximum Mana
+(20-30)% to Lightning Resistance
Cannot be ShockedFairgraves' trusty tricorne accompanied him far across
the seas, deep under the ground, and even beyond death.

RainbowstrideRainbowstride
Conjurer BootsQuality: +20%
Energy Shield: (88-102)Requires Level 53, 94 Int(4-6)% Chance to Block Spell Damage
(140-180)% increased Energy Shield
+(40-60) to maximum Mana
+20% to all Elemental Resistances
25% increased Movement Speed"They say that you should take life's troubles in your stride.
Some men have a longer stride than others."
- Gaius Sentari

The Writhing JarThe Writhing Jar
Hallowed Hybrid FlaskRecovers (120-168) Mana over 5.00 seconds
Recovers (435-609) Life over 5.00 seconds
Consumes (16-18) of 40 Charges on useRequires Level 60Instant Recovery
(75-65)% reduced Amount Recovered
2 Enemy Writhing Worms escape the Flask when used
Writhing Worms are destroyed when Hit
(20-10)% reduced Charges usedTo achieve godhood, they would cast off all that god has gifted us.
Mortality, compassion, even the sanctity of flesh.
- High Templar VollRight click to drink. Can only hold charges while in belt. Refills as you kill monsters.

It is not certain that it is due to weighting, or as the name of the card suggested, "Baiting" the players to expect to get Reefbane. Lastly, some of the fishing items are prerequisites for the quest offered by Krillson, Master Fisherman. While some of them can be quest reward of that quest chain.

It is a spread rumor, that

Here is the summary of experimental data and estimated probability

Note that due to smaller sampling size, streamers' outcome may not truly reflect the real probability. poorFishwife's data may be better in term of confidence interval.