Augmented Distant Memory is a unique

The map use the same tileset as the base item

, which itself use the tileset of The Torched Courts . The map area is rectangular in shape. There are bookshelf to divide the map into sub-sections. Some burnt bookshelf can be teleport through using

Blink ArrowBlink ArrowAttack, Minion, Duration, Movement, Travel, Bow
Mana Cost: (14-20)
Can Store 1 Use(s)
Cooldown Time: 3.00 sec
Cast Time: 1.00 secRequires Level 10Fires an arrow at the target destination. When the arrow lands, you are teleported to it and a clone is summoned at your old location. The clone is a minion that uses your bow and quiver.Per 1% Quality:
1.5% increased Arrow SpeedBase duration is 3 seconds
Minions deal 75% more Damage
Minions deal (0-114)% increased Damage
(0-57)% increased Minion Maximum LifePlace into an item socket of the right colour to gain this skill. Right click to remove from a socket.

Lightning WarpLightning WarpSpell, AoE, Duration, Movement, Lightning, Travel
Radius: 16
Mana Cost: (9-26)
Cast Time: 0.70 sec
Critical Strike Chance: 5.00%
Effectiveness of Added Damage: 60%Requires Level 10Waits for a duration before teleporting to a targeted destination, with the duration based on the distance and your movement speed. When the teleport occurs, lightning damage is dealt to the area around both where the player was and where they teleported to. Casting again will queue up multiple teleportations to occur in sequence.Per 1% Quality:
1% increased Cast SpeedDeals (1-37) to (19-707) Lightning Damage
(30-49)% reduced Duration
Can queue up to 50 usesPlace into an item socket of the right colour to gain this skill. Right click to remove from a socket.

or other similar movement skills. The map has a blue wall as boundaries which is typical in Synthesis-themed map. There are a few "holes" in the centres of the map area which wrapped by the same blue wall.

At the top left of the map there is a portal to the boss room.

The Synthesis area modifier is not revealed on the item. Only after the player entered the portal into the map area, the player can read the map mod.

A blind run walkthrough of the map and map boss

It is one of the possible options from Zana's Atlas Mission or whenever she appears in higher tier maps. 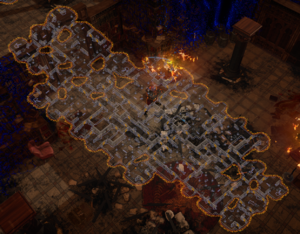 Typical layout of the map.