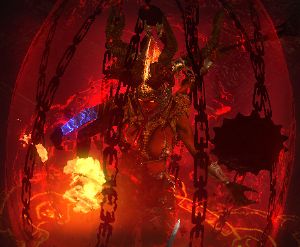 Atziri was the Queen of Vaal and reigned over the Vaal Empire. Her thaumaturgist was Doryani.

Atziri was the last queen of the Vaal civilization. She was extremely vain and held court in a room lined with mirrors. Atziri wished for eternal youth, inspired by the serial killer Zerphi living 168 years with a young body, and her thaumaturgist Doryani sacrificed countless victims trying to achieve this. Destroyed by the Cataclysm, she still lingers in a nightmare realm that is leaking corruption back into the land of Wraeclast.

The base type Sacrificial Garb obviously refers to the skins of the sacrificed ones. The lore text from Shadowstitch and Transcendent Spirit further indicate that.

Take comfort knowing that, even in death, we may serve our Queen and fuel her empire.

Destined for sacrifice, they were dressed in garments that blurred the lines between this world and the next.

Atziri has items related to her character:

Atziri is encountered in the following areas: