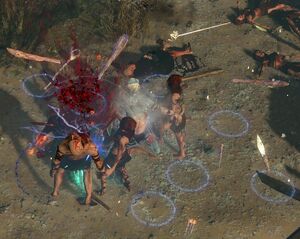 Animate Weapon is a spell that animates a melee weapon on the ground as an allied minion.

Animate Weapon can be used on identified weapons lying on the ground, but not on any ranged weapons unless

Spirit GuardsSpirit Guards
Viridian JewelLimited to: 1
Radius: Medium (1200)Minions deal (8-12)% increased Damage
With at least 40 Dexterity in Radius, Animate Weapon can Animate up to 12 Ranged WeaponsLong after the Karui passed through,
the whispers of those who stood their ground
at Lioneye's Watch could be heard amongst the rubble.Place into an allocated Jewel Socket on the Passive Skill Tree. Right click to remove from the Socket.

is used. The weapon is permanently consumed. If the "Key Pickup" option is enabled in the UI tab of the Options menu, the "Highlight items and objects" key must be held down in order to cast Animate Weapon. Attempting to animate a weapon with an item level higher than the level of the gem allows will cost mana and perform the cast animation but have no effect.

BladefallBladefallSpell, AoE, Physical, Duration
Radius: 12
Mana Cost: (12-23)
Cast Time: 0.70 sec
Critical Strike Chance: 6.00%
Effectiveness of Added Damage: 90%Requires Level 28Ethereal weapons rain from the sky, dealing damage to enemies in a sequence of volleys, each wider but less damaging than the last. Enemies can be hit multiple times where these overlap.Per 1% Quality:
0.5% increased Area of EffectBase duration is 6 seconds
Deals (44-411) to (66-617) Physical Damage
6% less Damage per Volley
100% increased Critical Strike Chance
20% reduced Critical Strike Chance per Volley
5 Volleys
Leaves a Lingering Blade in the ground for every Volley
Maximum 40 Lingering Blades can be left in the ground at a time
Leaves 50% fewer Lingering Blades in the ground if you don't Cast this Spell yourselfPlace into an item socket of the right colour to gain this skill. Right click to remove from a socket.

. They use the same base stats as

Animated Weapons are flying monsters, meaning they can fly over small obstacles. Flyers also can't be damaged by ground effects (e.g. burning ground). Flyers can travel over non-flying monsters without blocking their movement.[1]

Animated Weapons are minions that are considered to be using the original weapon animated. They are therefore affected by modifiers to minions, as well as support gems for weapons, such as

, but not affected by any of the player's damage or weapon modifiers.

The following unique items are related to Animate Weapon: