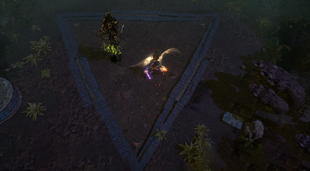 The triangular arena of Al-Hezmin

Al-Hezmin, the Hunter is one of the Elderslayers / Conquerors of the Atlas. He serves as one of the end-game bosses of the Atlas. The boss fight itself has 8 different levels, based on the player's current Atlas Awakening level. It is colloquially known as A1 Hezmin through A8 Hezmin.

and have unique Hunter modifiers.

Non-influenced items can have the Hunter's influence added using a

Hunter's Exalted OrbHunter's Exalted OrbStack Size: 10Adds Hunter influence and a new Hunter modifier to a rare itemRight click this item then left click a high-level rare item with no influence to apply it. Rare items can have up to six random modifiers. The item's Catalyst quality increases the chance of applying a modifier which matches the quality type. Removes 20% Quality applied by Catalysts on use.
Shift click to unstack.

, which is a rare drop from Al-Hezmin.

In most cases, defeating Al-Hezmin will drop a

that can be socketed into Atlas citadels.

Al-Hezmin's arena is a triangular area with a triangular acid pool in the center. Depending on which phase he's on, it's better or worse to stay inside the triangle.

Shared with other Conquerors

When you spend as much time in the Atlas as we did, basic survival skills no longer suffice, and it becomes necessary to master the lay of the land. That's a tall ask in a place where the land changes from day to day, and yet Al-Hezmin took to it like a rhoa to mud. I could not count the number of times he saved us from getting lost in endless twisting caverns, or spotted the tracks of a dangerous beast far sooner than the rest of us would have.

Our praise must have gone to his head, because he began to strive to be the best at all times. If Drox brought back two boars from a hunt, he needed to bring back three. In battle, he had to deal the flashiest and most devastating blows, and he had to make sure we all saw him do it.

His fixation on honing his skills was actually quite useful during our campaign against the Elder, so at the time we thought nothing of it, but... It hollowed him out in some fundamental way. He was full of bravado, yet at the same time desperately afraid of being exposed as merely second or third best. He was never unkind to me, even as the madness crept upon him, but for capable warriors like Drox that threatened his self-image... A clash was inevitable. We slipped away in the dead of night, but I doubt we've escaped a man of his talents. He's out there, lurking and watching, waiting for the best time to strike...